"The just-signed treaty is of epoch-making, historic importance," Russian President Vladimir Putin said. The troika of countries will cooperate in energy, industry, agriculture, and transport.... 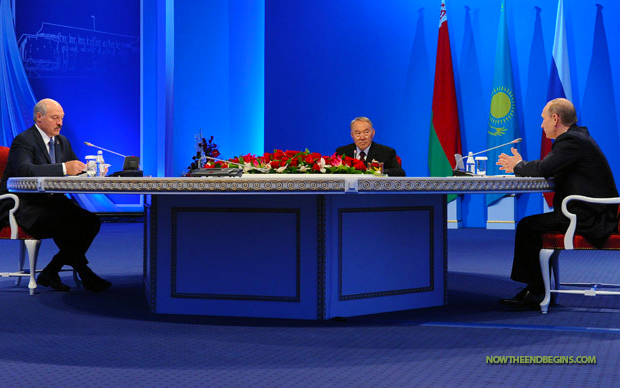 Russia, Belarus, and Kazakhstan signed the historic Eurasian Economic Union which will come into effect in January 2015.

“And the word of the LORD came unto me, saying, Son of man, set thy face against Gog, the land of Magog, the chief prince of Meshech and Tubal, and prophesy against him,” Ezekiel 38″1,2

The bible says in both Ezekiel 38 and 39 that the Magog, whom nearly all bible prophecy watchers agree is Russia, comes to great power in the last days to come against Israel. So it is interesting to watch as our modern-day Russia continues to grow exponentially in economic strength and military power.

“The just-signed treaty is of epoch-making, historic importance,” Russian President Vladimir Putin said. The troika of countries will cooperate in energy, industry, agriculture, and transport.

Cutting down trade barriers and comprising over 170 million people it will be the largest common market in the ex-Soviet sphere.

“In fact, we are shaping the largest common market in the CIS, with huge production, scientific and technological potential and enormous natural resources,” the President added.

Citizens of Russia, Belarus, and Kazakhstan will have the right to work freely throughout the member states without having to be issued any special work permits, Putin said.

Belarus and Kazakhstan are in third place in foreign trade with the Russian Federation, after the EU and China, Putin said.

The Russian leader said that the document brings Russia, Kazakhstan and Belarus to a new level of integration yes lets each individual state fully retain its sovereignty.

“We ensure a close and coherent economic collaboration and cooperation. Today we have created a powerful and attractive center of economic development, a large regional market that brings together more than 170 people. Our union has huge reserves of natural resources, including energy, which accounts for one fifth of the world’s gas reserves and 15 percent of oil reserves,” Putin said. source