Roman Catholic Church Sides With UNESCO And Palestine Against Israel

The Roman Catholic Church in the Holy Land on Monday hailed the granting by UNESCO of world heritage status to the Church of the Nativity in Bethlehem, AFP reported.... 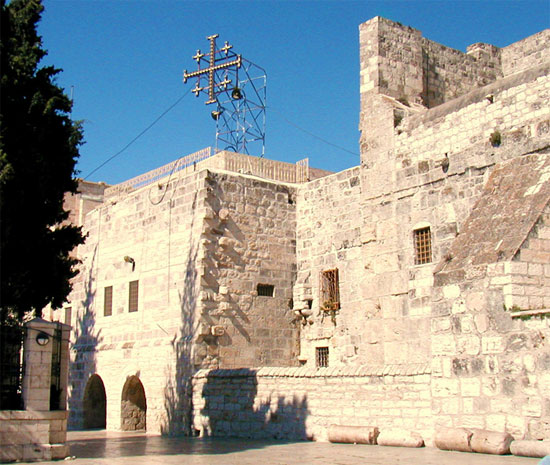 The Church of the Nativity in Bethlehem, Israel
by Geoffrey Grider July 3, 2012
NOW THE END BEGINS SHARE:

“Diplomatic Victory” of PA according to the RCC

The Roman Catholic Church in the Holy Land on Monday hailed the granting by UNESCO of world heritage status to the Church of the Nativity in Bethlehem, AFP reported.

The Church of the Nativity in Bethlehem, Israel

The report said the Roman Catholic Church said the UNESCO decision was a “diplomatic victory” for the Palestinian Authority, but it also called on the PA to respect existing arrangements dividing care of the site between the Catholic, Greek Orthodox and Armenian churches.

“There is an internal regulation, the status quo, which regulates the relations between the various Christian communities and their rights and duties in relation to the operation and maintenance of the (Church of the) Nativity,” AFP quoted a statement from the Latin Patriarchate of Jerusalem. “”It is desirable that UNESCO and the Palestinian Authority respect this and intervene only in exceptional cases.”

Israel angrily denounced the vote. Foreign Ministry spokeswoman Ilana Stein said the decision “has turned UNESCO into a theater of the absurd.”

“This is a sad day for the World Heritage Committee,” she said. The move was seen by some nations as dangerously mixing politics and culture.

The drive to get the church quickly recognized as a World Heritage site is part of the PA’s bid to win international recognition.

The application cited lack of regular restoration of the church due to the political situation since 1967, when Israel liberated Judea and Samaria (Yehuda and Shomron) during the Six Day War. The application also cited difficulties procuring equipment because of lack of free movement imposed by Israeli forces.

The application to place the Church on the World Heritage list shows the PA plans to put forward other sites for prestigious World Heritage recognition, eventually linking various landmarks to the life of Jesus.

In a controversial decision, UNESCO accepted the PA as a member last October, after 107 members voted in favor of the motion. Only 14 nations voted against the PA, including the United States, Canada, Germany and Israel.

The move prompted the United States to cut off funding to the organization, due to a longstanding law that prohibits U.S. support for any United Nations-affiliated body that accepts Palestinian Authority membership.

The organization was later forced to temporarily suspend new welfare programs in third world countries due to the large hole in its budget created by the loss of U.S. funds, so that much suffering of those whom UNESCO is intended to benefit was caused by the move.

The agency recently claimed that the Matriarch Rachel’s Tomb and the Tomb of the Patriarchs [Me’arat Hamachpela, the Patriarch’s Cave] are not exclusively Jewish sites and also belong to Christians and Muslims. – Source – IsraelNationalNews