“I’m concerned that Arab-Americans will feel they got punched in the solar plexus,” said James Zogby, the president of the Arab-American Institute who serves on the Democratic Party’s platform... 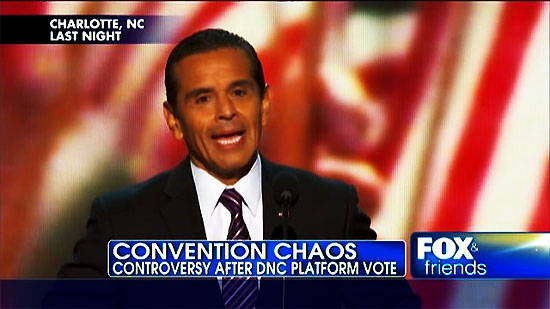 CHARLOTTE, N.C. — The Democratic party’s abrupt platform reversal on Jerusalem — reinstating language describing it as the capital of Israel despite loud objections from the Democratic National Convention floor — stirred fresh and unexpected controversy Thursday in Charlotte as Arab-American and Muslim party officials expressed anger over how the issue was handled and predicted that it may suppress Democratic votes this fall among constituents in key swing states.

Los Angeles Mayor Antonio Villaraigosa found himself at the center of the controversy on Wednesday over whether to include in the Democratic Party platform the statement that Jerusalem is the capital of Israel, when he rammed the proposal through on a voice vote in which the “yeas” did not come close to drowning out the “nays.”

“I’m concerned that Arab-Americans will feel they got punched in the solar plexus,” said James Zogby, the president of the Arab-American Institute who serves on the Democratic Party’s platform committee. “This was ham-fisted and a blunder … They stepped all over the convention the way this was done.”

Zogby, who has long served as a key party liaison to the Arab-American community, made his comments Thursday outside a luncheon meeting of the Muslim Democratic caucus, a  group that consists of 112 delegates. Many of those present shared his outrage, especially at  Los Angeles Mayor Antonio Villaraigosa, the convention chairman.

During the proceedings Wednesday, Villaraigosa asked convention delegates three times to approve by voice-vote a motion reinstating language that had been dropped from the official party platform, declaring that “Jerusalem is and will remain the capital of Israel.”

Despite a loud chorus of “No!” and some boos that appeared to be at least as loud as those shouting “Yes,” Villaraigosa declared the motion to have passed by the required two-thirds vote.

Most political analysts have portrayed the Jerusalem issue as a potent one because of its potential impact on Jewish voters. But  Zogby and others at the luncheon noted that Arab-Americans and Muslim-American voters are a growing and important voting block: The number of Muslim Americans — now about 2.6 million — is expected to double to 6.2 million by 2030.  Moreover, their numbers are especially concentrated in key swing states such as Ohio and Florida: There are, for example, currently 124,000 Muslim voters in Florida alone. source – NBC Politics