Thousands of people called for the removal Jordan's King Abdullah at a rally in downtown Amman on Friday in protest at fuel price hikes, in a marked escalation of... 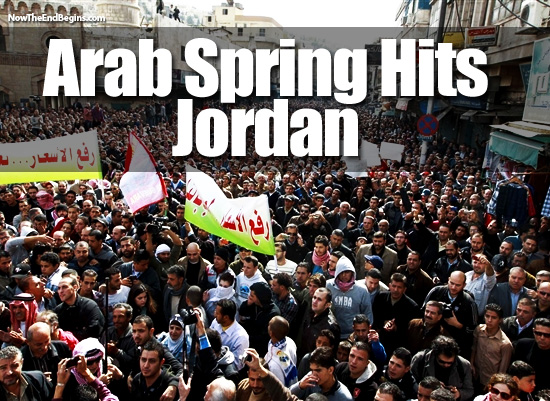 Protesters from the Islamic Action Front and other opposition parties shout slogans during a demonstration after Friday prayers in Amman. Muhammad Hamed / Reuters
by Geoffrey Grider November 17, 2012
NOW THE END BEGINS SHARE:

The Muslim Brotherhood is about to take Jordan

“They have said, Come, and let us cut them off from being a nation; that the name of Israel may be no more in remembrance. For they have consulted together with one consent: they are confederate against thee:” Psalm 83

US President Barack Hussein Obama, so effective in arming and financing the Muslim Brotherhood’s takeover of Egypt has not yet voiced his support for the poor, misunderstood “students who want democratic change” in Jordan, but he will. You can almost set your watch by it…

From NBC WorldNews: Thousands of people called for the removal Jordan’s King Abdullah at a rally in downtown Amman on Friday in protest at fuel price hikes, in a marked escalation of street anger in the third day of demonstrations in the Western-backed kingdom.

Protesters from the Islamic Action Front and other opposition parties shout slogans during a demonstration after Friday prayers in Amman. Muhammad Hamed / Reuters

“Go down Abdullah, go down,” the protesters Friday chanted as police, some in riot gear, largely stayed away from crowd, near the main Husseini Mosque.

The crowed also chanted “The people want the downfall of the regime,” the rallying cry of the Arab Spring uprisings that have shaken the Middle East and toppled leaders in Tunisia, Egypt, Libya and Yemen.

“Shame. Shame. Prices are spiking and Abdullah gambles,” people shouted. Criticizing the king in public is forbidden in Jordan and is punishable by up to three years in jail.

The Muslim Brotherhood, the country’s largest opposition group, had called on people to take to the streets, but top officials from the group choose not to participate in the rally. The 50-year-old king has ruled since 1999.

On Thursday, the protester was killed and scores were injured during an attack on a police station overnight in Jordan’s second-largest city of Irbid, witnesses told Reuters. Police said they used tear gas to disperse masked youths who attacked government property.

Some protesters torched part of Irbid’s municipal headquarters later on Thursday to vent their anger at officials who said the dead young man had been armed, the witnesses said.

“The country has risen up from north to south and this state of popular tension is unprecedented,” said Murad Adailah, a senior member of the Islamic Action Front, the political arm of the Muslim Brotherhood.

‘Political crisis’
A staunch U.S. ally with the longest border with Israel, Jordan has not seen the kind of mass revolts that swept other Arab countries. The coming days will be crucial in testing whether the relative calm can continue.

Jordanians have held occasional protests inspired by the Arab Spring uprisings, demanding democratic reforms and curbs on corruption. But those gatherings were peaceful and the security forces did not use weapons.

Demonstrators sometimes chant against Abdullah but there seems to be little enthusiasm for revolution. The monarchy is seen as a guarantor of stability, balancing the interests of tribes native to the east of the Jordan river with those of the majority of citizens, who are of Palestinian origin.

But the price rises announced on Tuesday could boost the popularity of the Islamist opposition, emboldened by the successes of its ideological brethren in Egypt and Tunisia.

The government has warned Islamists not to take advantage of the tension caused by the price rises but they have never sounded more confident.

“This is a huge political crisis and it has become clear that there is no more room to delay real and comprehensive reforms,” said Jamil Abu Bakr, a Muslim Brotherhood leader.

Most of the civil unrest is in outlying areas inhabited by powerful tribes who are the original inhabitants of the country. They supply the army and security forces with recruits and form the backbone of support for the ruling Hashemite dynasty. source – NBC WorldNews