Furious protesters have joined rallies around the world after terror group Hamas called for a “day of rage” in response to the US President’s announcement. Muslims in Indonesia and Malaysia joined rallies outside the countries’ US embassies with Malaysia’s sports minister Khairy Jamaluddin threatening “the world will rise against the United States”.

Riots sparked by Donald Trump’s provocative move to recognize the Holy City of Jerusalem as Israel’s capital have spread to Indonesia and Malaysia.

“Yea, every pot in Jerusalem and in Judah shall be holiness unto the LORD of hosts: and all they that sacrifice shall come and take of them, and seethe therein: and in that day there shall be no more the Canaanite in the house of the LORD of hosts.” Zechariah 14:21 (KJV)

EDITOR’S NOTE: The conflict between Israel and the Canaanites, commonly known today as the Palestinians, does not now nor has ever been about creating “two states” where both peoples can live “side by side”. It has always been and will always be about who has the right to claim Jerusalem as their capital, specifically East Jerusalem where the Temple Mount is located. The prophet Zechariah, prophesying about life in the Millennial Kingdom when Jesus returns to rule for 1,000 years at the Second Coming, sees a one state solution without a Palestinian anywhere to be found. The Battle of Armageddon will be fought over who controls Jerusalem, Antichrist or Jesus Christ. Guess who wins?

Furious protesters have joined rallies around the world after terror group Hamas called for a “day of rage” in response to the US President’s announcement. Muslims in Indonesia and Malaysia joined rallies outside the countries’ US embassies with Malaysia’s sports minister Khairy Jamaluddin threatening “the world will rise against the United States”.

One protester was killed and 100 were wounded Friday during a “day of rage” in the West Bank, Gaza and in East Jerusalem, as Palestinians railed against President Trump’s recognition of the ancient city as Israel’s capital, according to reports. The dead man was felled by Israeli fire in Gaza, while others were injured from tear gas inhalation and rubber bullets, Palestinian officials say. source

Hundreds have also taken part in protests in Iran with state TV airing footage of marchers chanting “Death to America” and “Death to Israel” while holding up Palestinian flags and banners. Palestinian Islamist movement Hamas, which runs the Gaza Strip, has called for a “day of rage” with its leader Ismail Haniya said a new upraising should be launched. 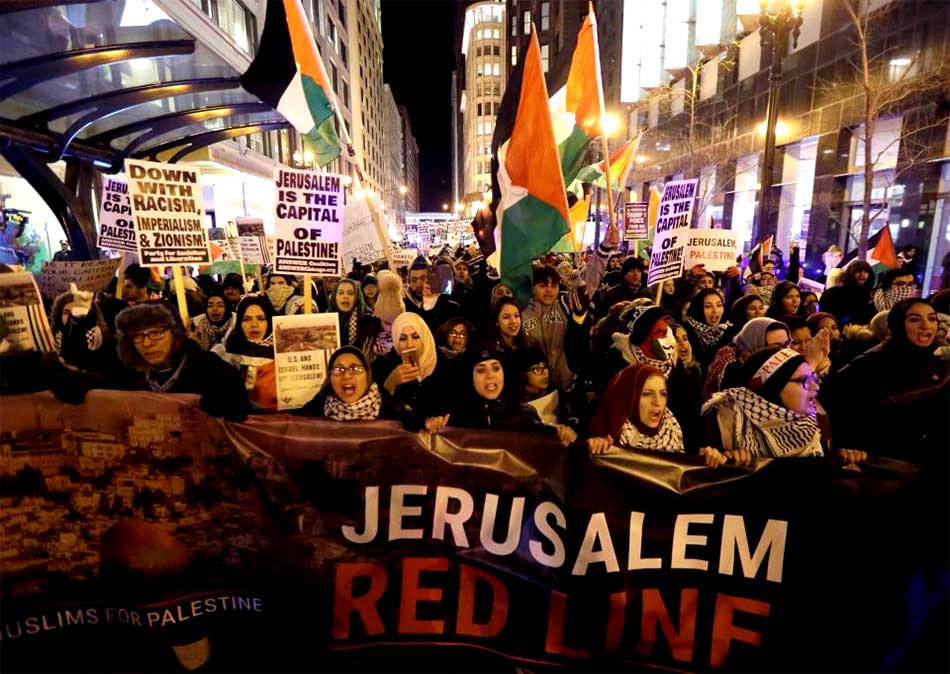 Hundreds more police officers have been deployed in Jerusalem’s Old City today with further conflicts feared. Thursday saw clashes between Palestinians and Israeli troops in cities throughout the West Bank – including the holy city of Bethlehem – with at least 16 Palestinians wounded. Early reports suggested injuries were mostly from tear gas and rubber bullets, but at least one demonstrator was hurt by live fire.

Trump’s announcement was met by an major diplomatic backlash as Israeli Prime Minister Benjamin Netanyahu lavished praise on the president.

EU diplomatic chief Federica Mogherini said the decision could take the region “backwards to even darker times”. While Russian President Vladimir Putin said he was “deeply concerned” and Turkish President Recep Tayyip Erdogan said it would put the region in a “ring of fire”.

In Lebanon, Hassan Nasrallah, the head of Hezbollah, called for a mass demonstration on Monday while protests are also planned in Turkey and Malaysia. Demonstrations have even been seen in the US with several hundred protesters taking to the street in Chicago chanting “free Palestine”. source

“Wherefore it shall come to pass, that when the Lord hath performed his whole work upon mount Zion and on Jerusalem, I will punish the fruit of the stout heart of the king of Assyria, and the glory of his high looks.” Isaiah 10:12 (KJV)