“I would insist on every individual having a unique ID permanently attached, an implanted chip to provide an easy, fast inexpensive way to identify individuals,” she said on The... 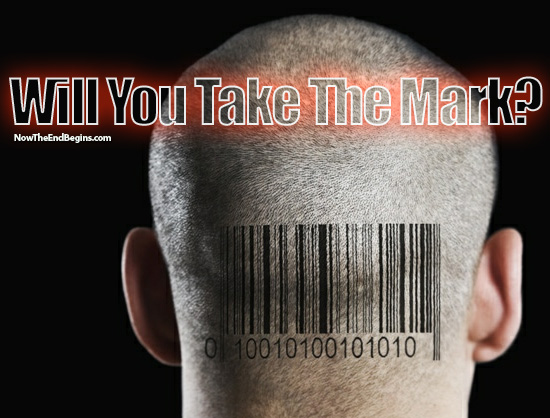 The U.S. continues to flirt with the idea of a ‘human barcode,’ an electronic ID chip assigned to every person at birth.
by Geoffrey Grider June 2, 2012
NOW THE END BEGINS SHARE:

The U.S. continues to flirt with the idea of a ‘human barcode,’ an electronic ID chip assigned to every person at birth.

15 years ago, when I told people that the day would come in our lifetime that human beings would receive implantable tracking chips as the scripture foresaw, I was mocked and laughed at by family and friends alike. But today, it is on the fast-track to becoming a reality. No longer a question of ‘if’, but only of ‘when’. Read what the scripture of truth has to say about implanting human beings:

Everything that the bible says would happen, will happen. And we are living in the time of the end, where fulfillment of bible prophecy is happening at an astonishing rate of speed. For more information on the MARK OF THE BEAST, click here to educate yourself. It  just may save your eternal soul…

From NY Daily News: Microchip implants have become standard practice for our pets, but have been a tougher sell when it comes to the idea of putting them in people.

The U.S. continues to flirt with the idea of a ‘human barcode,’ an electronic ID chip assigned to every person at birth.

Science fiction author Elizabeth Moon last week rekindled the debate on whether it’s a good idea to “barcode” infants at birth in an interview on a BBC radio program.

“I would insist on every individual having a unique ID permanently attached — a barcode if you will — an implanted chip to provide an easy, fast inexpensive way to identify individuals,” she said on The Forum, a weekly show that features “a global thinking” discussing a “radical, inspiring or controversial idea” for 60 seconds .

Moon believes the tools most commonly used for surveillance and identification — like video cameras and DNA testing — are slow, costly and often ineffective. In her opinion, human barcoding would save a lot of time and money.

The proposal isn’t too far-fetched – it is already technically possible to “barcode” a human – but does it violate our rights to privacy?

Opponents argue that giving up anonymity would cultivate an “Orwellian” society where all citizens can be tracked.

“To have a record of everywhere you go and everything you do would be a frightening thing,” Stanley, senior policy analyst at the American Civil Liberties Union, told the Daily News.

He warned of a “check-point society” where everyone carries an internal passport and has to show their papers at every turn, he said.

“Once we let the government and businesses go down the road of nosing around in our lives…we’re going to quickly lose all our privacy,” said Stanley.

There are already, and increasingly, ways to electronically track people. Since 2006, new U.S. passports include radio frequency identification tags (RFID) that store all the information in the passport, plus a digital picture of the owner.

In 2002, an implantable ID chip called VeriChip was approved by the U.S. Food and Drug Administration. The chip could be implanted in a person’s arm, and when scanned, could pull up a 16 digit ID number containing information about the user.

It was discontinued in 2010 amid concerns about privacy and safety.

Still scientists and engineers have not given up on the idea.

A handful of enterprising companies have stepped into the void left by VeriChip, and are developing ways to integrate technology and man.

Biotech company MicroCHIPS has developed an implantable chip to deliver medicine to people on schedule and without injection. And technology company BIOPTid has patented a noninvasive method of identification called the “human barcode.”

Advocates say electronic verification could help parents or caregivers keep track of children and the elderly. Chips could be used to easily access medical information, and would make going through security points more convenient, reports say.

But there are also concerns about security breaches by hackers. If computers and social networks are already vulnerable to hacking and identify theft, imagine if someone could get access to your personal ID chip?

Stanley cautioned against throwing the baby out with the bathwater each time someone invents a new gadget. “We can have security, we can have convenience, and we can have privacy,” he said. “We can have our cake and eat it too.” source – NY Daily News