In more than a dozen interviews, including with seven senior church officials, insiders say the change has left the hierarchy more polarized over the direction of the church than... 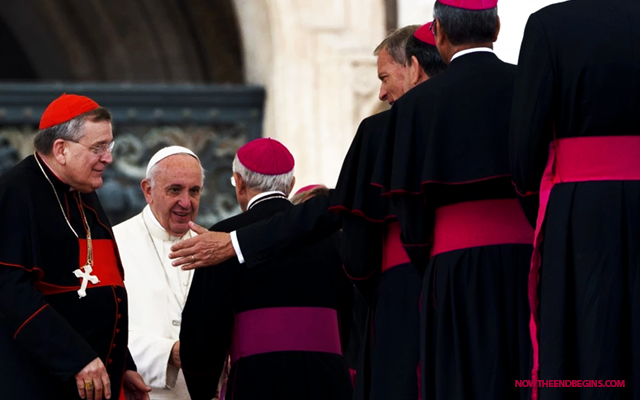 Papal power, Burke warned, “is not absolute.” He added, “The pope does not have the power to change teaching or doctrine.”
by Geoffrey Grider September 8, 2015
NOW THE END BEGINS SHARE:

Conservative dissent is brewing inside the Vatican

“And there came one of the seven angels which had the seven vials, and talked with me, saying unto me, Come hither; I will shew unto thee the judgment of the great whore that sitteth upon many waters: And the woman was arrayed in purple and scarlet colour, and decked with gold and precious stones and pearls, having a golden cup in her hand full of abominations and filthiness of her fornication: And upon her forehead was a name written, MYSTERY, BABYLON THE GREAT, THE MOTHER OF HARLOTS AND ABOMINATIONS OF THE EARTH.” Revelation 17:1,4,5 (KJV)

EDITOR’S NOTE: The Catholic Church has long bragged that since it’s creation in 325 AD it has “never changed”. Maybe that’s true, right up until the moment that Francis became Pope. Since then, the winds of change have blown so hard that many Conservative Cardinals can barely recognize it anymore. What they fail to realize is why Pope Francis is making so many changes so quickly. He is fulfilling end times bible prophecy. Revelation 17 and 18 firmly declare that the Vatican is the “Mother of Harlots”, ruled over by a False Prophet who prepares the way for Antichrist.

VATICAN CITY — On a sunny morning earlier this year, a camera crew entered a well-appointed apartment just outside the 9th-century gates of Vatican City. Pristinely dressed in the black robes and scarlet sash of the princes of the Roman Catholic Church, Wisconsin-born Cardinal Raymond Burke sat in his elaborately upholstered armchair and appeared to issue a warning to Pope Francis.

A staunch conservative and Vatican bureaucrat, Burke had been demoted by the pope a few months earlier, but it did not take the fight out of him. Francis had been backing a more inclusive era, giving space to progressive voices on divorced Catholics as well as gays and lesbians. In front of the camera, Burke said he would “resist” liberal changes — and seemed to caution Francis about the limits of his authority. “One must be very attentive regarding the power of the pope,” Burke told the French news crew.

Papal power, Burke warned, “is not absolute.” He added, “The pope does not have the power to change teaching or doctrine.”

Burke’s words belied a growing sense of alarm among strict conservatives, exposing what is fast emerging as a culture war over Francis’s papacy and the powerful hierarchy that governs the Roman Catholic Church.

Yet as he upends church convention, Francis also is grappling with a conservative backlash to the liberal momentum building inside the church. In more than a dozen interviews, including with seven senior church officials, insiders say the change has left the hierarchy more polarized over the direction of the church than at any point since the great papal reformers of the 1960s.

The conservative rebellion is taking on many guises — in public comments, yes, but also in the rising popularity of conservative Catholic Web sites promoting Francis dissenters; books and promotional materials backed by conservative clerics seeking to counter the liberal trend; and leaks to the news media, aimed at Vatican reformers.

In his recent comments, Burke was also merely stating fact. Despite the vast powers of the pope, church doctrine serves as a kind of constitution. And for liberal reformers, the bruising theological pushback by conservatives is complicating efforts to translate the pope’s transformative style into tangible changes.

“At least we aren’t poisoning each other’s chalices anymore,” said the Rev. Timothy Radcliffe, a liberal British priest and Francis ally appointed to an influential Vatican post in May. Radcliffe said he welcomed open debate, even critical dissent within the church. But he professed himself as being “afraid” of “some of what we’re seeing”

“We have a serious issue right now, a very alarming situation where Catholic priests and bishops are saying and doing things that are against what the church teaches, talking about same-sex unions, about Communion for those who are living in adultery,” the official said. “And yet the pope does nothing to silence them. So the inference is that this is what the pope wants.” source