The U.S. government's aggressive prosecution of leaks and efforts to control information are having a chilling effect on journalists and government whistle-blowers, according to a report released Thursday on... 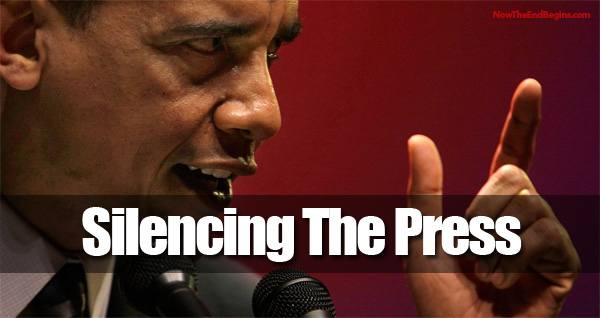 To date, six government employees and two contractors have been targeted for prosecution under the 1917 Espionage Act for accusations that they leaked classified information to the press. There were just three such prosecutions under all previous U.S. presidents.
by Geoffrey Grider October 10, 2013
NOW THE END BEGINS SHARE:

Remember watching the old newsreels that chronicled the rise of Adolf Hitler and Nazi Germany? Remember how mad you got when you saw the German people and the Jews doing almost nothing to stem the rising tide of what was an obviously (to us now) corrupt and tyrannical government? You asked yourself, time and again, “why didn’t they do anything about it??”

Welcome to Obama’s America 2013…you now have your answer.

WASHINGTON (AP) — The U.S. government’s aggressive prosecution of leaks and efforts to control information are having a chilling effect on journalists and government whistle-blowers, according to a report released Thursday on U.S. press freedoms under the Obama administration.

To date, six government employees and two contractors have been targeted for prosecution under the 1917 Espionage Act for accusations that they leaked classified information to the press. There were just three such prosecutions under all previous U.S. presidents.

The Committee to Protect Journalists conducted its first examination of U.S. press freedoms amid the Obama administration’s unprecedented number of prosecutions of government sources and seizures of journalists’ records. Usually the group focuses on advocating for press freedoms abroad.

Leonard Downie Jr., a former executive editor of The Washington Post, wrote the 30-page analysis entitled “The Obama Administration and the Press.” The report notes President Barack Obama came into office pledging an open, transparent government after criticizing the Bush administration’s secrecy, “but he has fallen short of his promise.”

“In the Obama administration’s Washington, government officials are increasingly afraid to talk to the press,” wrote Downie, now a journalism professor at Arizona State University. “The administration’s war on leaks and other efforts to control information are the most aggressive I’ve seen since the Nixon administration, when I was one of the editors involved in The Washington Post’s investigation of Watergate.”

Downie interviewed numerous reporters and editors, including a top editor at The Associated Press, following revelations this year that the government secretly seized records for telephone lines and switchboards used by more than 100 AP journalists. Downie also interviewed journalists whose sources have been prosecuted on felony charges

Those suspected of discussing classified information are increasingly subject to investigation, lie-detector tests, scrutiny of telephone and email records and now surveillance by co-workers under a new “Insider Threat Program” that has been implemented in every agency.

“There’s no question that sources are looking over their shoulders,” Michael Oreskes, the AP’s senior managing editor, told Downie. “Sources are more jittery and more standoffish, not just in national security reporting. A lot of skittishness is at the more routine level. The Obama administration has been extremely controlling and extremely resistant to journalistic intervention.”

To bypass journalists, the White House developed its own network of websites, social media and even created an online newscast to dispense favorable information and images. In some cases, the White House produces videos of the president’s meetings with major figures that were never listed on his public schedule. Instead, they were kept secret – a departure from past administrations, the report noted.

Frank Sesno, a former CNN Washington bureau chief who is now director of George Washington University’s School of Media and Public Affairs, told Downie the combined efforts of the Obama administration are “squeezing the flow of information.”

“Open dialogue with the public without filters is good, but if used for propaganda and to avoid contact with journalists, it’s a slippery slope,” Sesno said.

In the report, White House officials objected to findings that the administration has limited transparency or information. Press Secretary Jay Carney said such complaints are part of the “natural tension” between the White House and the press.

“The idea that people are shutting up and not leaking to reporters is belied by the facts,” Carney told Downie.

National Security Adviser Ben Rhodes said there is still investigative reporting about national security issues with information from “nonsanctioned sources with lots of unclassified information and some sensitive information.”

Downie found the Sept. 11 terrorist attacks were a “watershed moment,” leading to increased secrecy, surveillance and control of information. There is little direct comparison between the Bush and Obama administrations, though some journalists told Downie the Obama administration exercises more control.

Shortly after Obama entered office, the White House was under pressure from intelligence agencies and Congress to stop leaks of national security information. The administration’s first prosecution for leaking information came in April 2009 after a Hebrew linguist working for the FBI gave a blogger classified information about Israel.

Other prosecutions followed, targeting some government employees who believed they were whistle-blowers. The administration has rejected whistle-blower claims if they do not involve “waste, fraud or abuse,” according to report. So sources exposing questionable or illegal practices are considered leaks.

To date, six government employees and two contractors have been targeted for prosecution under the 1917 Espionage Act for accusations that they leaked classified information to the press. There were just three such prosecutions under all previous U.S. presidents.

By 2012, an AP report about the CIA’s success in foiling a bomb plot in Yemen further escalated the Obama administration’s efforts, even as the White House congratulated the CIA on the operation, Downie wrote. The disclosure in May that the government had secretly subpoenaed and seized AP phone records drew sharp criticism from many news organizations and civil rights advocates.

In September, the Justice Department announced AP’s phone records led investigators to a former FBI bomb technician who pleaded guilty to disclosing the operation to a reporter.

“This prosecution demonstrates our deep resolve to hold accountable anyone who would violate their solemn duty to protect our nation’s secrets and to prevent future, potentially devastating leaks by those who would wantonly ignore their obligations to safeguard classified information,” the Justice Department said last month.

Kathleen Carroll, AP’s executive editor, said the report highlights the growing threats to independent journalism in a country that has upheld press freedom as a measure of democratic society for two centuries.

“We find we must fight for those freedoms every day as the fog of secrecy descends on every level of government activity,” she said in a statement. “That fight is worthwhile, as we learned when the outcry over the Justice Department’s secret seizure of AP phone records led to proposed revisions intended to protect journalists from overly broad investigative techniques. Implementation of those revisions is an important next step.”

In its report, the Committee to Protect Journalists recommends several reforms, including ending the practice of charging people who leak information to journalists with espionage and preventing secret subpoenas of journalists’ records. source – AP