Egypt's deposed president, Hosni Mubarak, went into a full coma on Saturday night at his residence in the Red Sea resort of Sharm al-Sheikh, an Egyptian newspaper reported on... 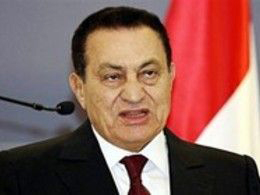 Outlived his usefulness?
Give the New World Order (George Soros, et al) credit for one thing – when they decide you are no longer useful and serving their purposes, you are done. Quickly. Less than one week after a military coup orchestrated by the Muslim Brotherhood deposed his 30 year rule in Egypt, Hosni Mubarak mysteriously winds up in a coma. Well, at least they didn’t cut his brake lines.

Egypt’s deposed president, Hosni Mubarak, went into a full coma on Saturday night at his residence in the Red Sea resort of Sharm al-Sheikh, an Egyptian newspaper reported on Monday, quoting well-informed sources. Mubarak and his family moved to Sharm al-Sheikh on Thursday night following his final speech, in which he handed over executive authority to former Vice-President Omar Suleiman, Egypt’s al-Masry al-Youm reported.

The same sources said that Mubarak was currently receiving medical treatment but that no decision had yet been made on whether to transfer the 82-year-old former head-of-state to a hospital. Rumors had circulated earlier that Mubarak had fainted twice while recording his final speech, which was broadcast on state television on Thursday evening. Prime Minister Ahmed Shafiq confirmed Sunday that Mubarak was in Sharm el-Sheikh and has not leave the country.” source – Al Arabiya

Editor’s note: We have no verification on this story at the time of this writing, but seeing as it’s popping up on many ME websites, we thought we would run it anyway. We will keep you posted as it develops….