Russian troops and unarmed men stormed Ukraine's naval headquarters in the Crimean port of Sevastopol on Wednesday and raised the Russian flag in a tense but peaceful takeover that... 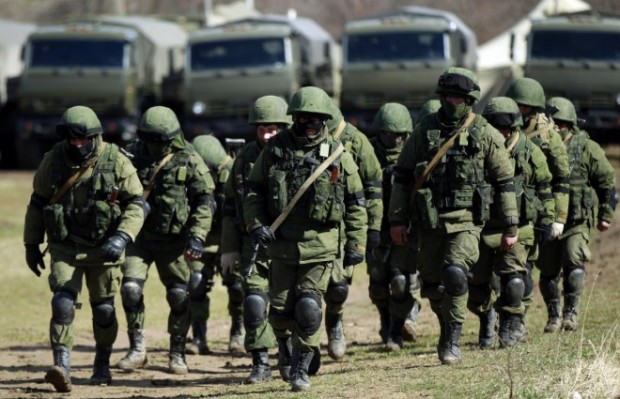 Now, I wonder whatever happened to that “red line” that John Kerry and Barack Obama said Russia better not cross? It would appear that the “red line” has become a Red Dawn of the Russian Army in Ukraine.

Memo to the White House: Now would be a good time for more sanctions, maybe against Putin’s butler and his third grade teacher?

SEVASTOPOL/SIMFEROPOL, Ukraine (Reuters) – Russian troops and unarmed men stormed Ukraine’s naval headquarters in the Crimean port of Sevastopol on Wednesday and raised the Russian flag in a tense but peaceful takeover that signals Moscow’s intent to neutralize any armed opposition.

Russian soldiers, and so-called “self-defense” units of mainly unarmed volunteers who are supporting them across the Black Sea peninsula, moved in early in the morning and quickly took control.

Shortly after the incident, Ukraine’s acting Defence Minister Ihor Tenyukh said in Kiev that the country’s forces would not withdraw from Crimea even though Russian President Vladimir Putin has signed a treaty to make it part of Russia. But an hour later, Ukrainian servicemen, unarmed and in civilian clothing, began walking out of the headquarters.

Interfax Ukraine news agency said the commander of the Ukrainian navy, Admiral Serhiy Haiduk, was among those who left and was driven away by officers of Russia’s FSB intelligence service. The report could not be independently confirmed.

The first group of servicemen was followed within a few minutes by a handful of troops in Ukrainian uniform, looking shell-shocked at the dramatic turn of events.

“This morning they stormed the compound. They cut the gates open, but I heard no shooting,” said Oleksander Balanyuk, a captain in the navy.

“This thing should have been solved politically. Now all I can do is stand here at the gate. There is nothing else I can do,” he told Reuters, appearing ashamed and downcast.

Russia’s Itar-Tass news agency reported that Alexander Vitko, commander of Russia’s Black Sea Fleet which is based in Sevastopol, had been involved in talks at the headquarters. source – Yahoo News