The earthquake which yesterday ripped through the East Coast of America has devastated historic buildings, causing a huge $100million in damage.Terrifying tremors were felt throughout the north east causing... 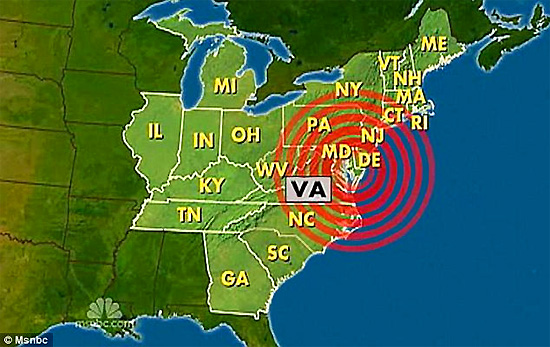 Ripples: This map shows the vast spread of the affect of the earthquake. Buildings were evacuated as far away as Toronto, Canada
by Geoffrey Grider August 24, 2011
SHARE THIS IMPORTANT NTEB ARTICLE:

The earthquake which yesterday ripped through the East Coast of America has devastated historic buildings, causing a huge $100million in damage.Terrifying tremors were felt throughout the north east causing buildings from Washington D.C. through New York City to Toronto, Canada, to be evacuated yesterday for fear of collapse.

Ripples: This map shows the vast spread of the affect of the earthquake. Buildings were evacuated as far away as Toronto, Canada

The 5.8 magnitude earthquake, which originated in Virginia, brought panic to the Pentagon and the White House, and sparked fears that the iconic Washington Monument would fall.

Overall damage caused across the coast was estimated to be a huge $100 million. In Mineral, Virginia – the epicentre of the earthquake – people’s homes were trashed and supermarkets looked as if they had been ransacked by looters.

As ripples from the tremor hit Washington and New York, city streets across the coast were filled with thousands of people hauled out of buildings for fear they could collapse. There were also fears of a nuclear disaster of the kind seen in Japan’s Fukushima because the epicentre was just ten miles from a nuclear power plant. Federal officials said two nuclear reactors at the North Anna Power Station in Louisa County, Virginia, were automatically taken off line by safety systems.

At the Pentagon, it was reported that staff ran from the building fearing they were under attack.

As authorities revealed that aftershocks from the earthquake could last for weeks, it emerged the Washington Monument will be closed indefinitely to the public after engineers found cracks in the building.

The monument suffered minor damage but cracks were found in the stones at the top of the structure, sparking fears of collapse. A police officer had earlier insisted he had seen the monument tilting because of the vibrations. A family who were at the top of the monument when the quake hit said they felt it swap almost a foot, while pieces of the structure fell on top of them.
At the National Cathedral in Washington D.C. three of the four pinnacles of the tower were damaged. Engineers are currently working to try to limit the damage. source – Daily Mail UK