At a time when America should be standing idly by Israel as she faces danger on all sides, American politicians never cease from joining the wrong side. They... 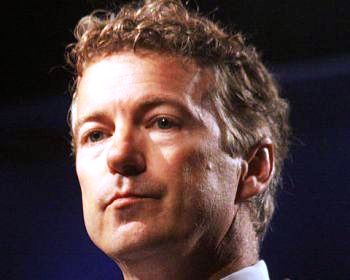 At a time when America should be standing idly by Israel as she faces danger on all sides, American politicians never cease from joining the wrong side. They can now welcome Rand Paul. In 2010 Paul was extremely popular with the Tea Party movement and ran heavily on fiscal Conservatism. However, he has placed his fiscal Conservatism in the worst spot possible as he called on America to quit giving aid to Israel.

In an interview with ABC news this week Paul said “I think they’re an important ally, but I also think that their per capita income is greater than probably three-fourths of the rest of the world. Should we be giving free money or welfare to a wealthy nation? I don’t think so.”

Paul expressed that he is a supporter of Israel but that the debt in America is just too much to keep the current aid going. Funny how the one place Paul is concentrating on is the one place America mustn’t cut spending. Maybe Paul should call on the Government to quit allocating 350 million dollars a year of tax payer dollars to abortion clinic Planned Parenthood! Sorry Rand but a true supporter of Israel is going to support them not only in words but by action.

First of all this isn’t about giving ‘’free’’ money to wealthy nation. This is about supporting our dearest ally in the Middle East as they continue to face increasingly dire circumstances. Yes, America must cut spending and decrease our debt immediately but not at the expense of throwing our ally Israel under the bus in the process.

Paul’s comments have caused a major stir in the Christian community to the extent of Pastor John Hagee commenting on the issue implying that this is not the way the majority of Americans or Tea Party members feel. Over 22,000 emails have been sent to Paul’s office demanding Paul recant his statement. Thus far, he has not recanted but stands by his statement.

This is what happens when politicians are sent to Washington that have no discernment whatsoever about the necessary relationship between Israel and America. This just goes to prove that America cannot put hope in politicians because it doesn’t take long for their true colors to show. The only place we can put that hope is in our God Almighty.

UPDATE: Rand Paul’s office was contacted about this story and a very sweet aide there told NTEB that Rand Paul “makes no distinction between Israel and any other nation we provide aid to”….meaning – Israel is no one special, cut them off. So clearly, Rand holds no special regard to the nation of Israel or its people who are under constant threat of Muslim attack.

Message to Rand: “And I will bless them that bless thee, and curse him that curseth thee: and in thee shall all families of the earth be blessed.” Genesis 12:3