Vladimir Putin has reappeared in Russia, after being gone for 10 days. There were many speculating as to where he was, but no one knew for sure. “And ye... 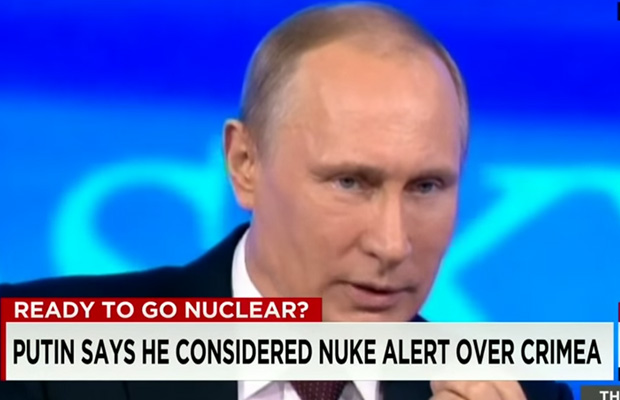 Vladimir Putin has reappeared in Russia, after being gone for 10 days. There were many speculating as to where he was, but no one knew for sure.

“And ye shall hear of wars and rumours of wars: see that ye be not troubled: for all these things must come to pass, but the end is not yet. For nation shall rise against nation, and kingdom against kingdom: and there shall be famines, and pestilences, and earthquakes, in divers places.  All these are the beginning of sorrows.” Matthew 24:6-8 (KJV)

Well, Vlad is back, and he’s flexing his Russian muscles and running his mouth about his nuclear arsenal, and how the world almost got a taste of them during the crisis in Ukraine. He is declaring that he was ready to use nukes to insure the annexation of Crimea from Ukraine last year.

Putin made the comments in a pre-recorded documentary broadcast on Russian state television to mark the one-year anniversary of Moscow’s takeover of the Black Sea peninsula. The film featured an interview in which Putin admits “we were ready to do this” when asked about his willingness to ready Russia’s nuclear arsenal.

“Russian people live there,” Putin said of his policy toward the Crimea after the fall of Ukraine’s former pro-Moscow leader, Viktor Yanukovych. “They were in danger. We cannot abandon them.” [1] – source

So, Putin was fearing for the people of Crimea, claiming that they were in danger. I have a strong suspicion that Crimea was merely Act 1 in the latest Russian play entitled “USSR Regathered.” I’m certain that Ukraine is on perpetual high alert, because they know that they very possibly appear in Act 2.

The fleet got its orders at 8 a.m. Monday, according to Sputnik, launching a land, sea and air drill that will involve 38,000 troops, 41 ships, 15 submarines and 110 aircraft.

“The main task of the (combat readiness drill) is to assess the armed forces from the Northern Fleet’s capabilities in fulfilling tasks in providing military security of the Russian Federation in the Arctic region,” Russian Defense Minister Gen. Sergey Shoigu told the media outlet. “New challenges and threats of military security demand the further heightening of military capabilities of the armed forces and special attention will be paid to the state of the newly formed strategic merging (of forces) in the North.”

The drills will run through Friday, Sputnik reported.

Is Vladimir Putin arming up for a new Cold War?

There are so many variables and scenarios; falling gas prices negatively impacting Russia’s economy; Iran is on the threshold of being given the green light on making nukes; ISIS continues on their murderous rampage; the EU is struggling with failing economies and striving to keep sanctions in place against Russia for their dealings with Ukraine.

I pray this will not happen, but I cannot help but look at this world and wonder if WWIII could break out at any time.