Prophecy Being Fulfilled As Jews Return To Israel In Record Numbers

Jews in France are fleeing by the thousands to return to their ancestral home of Israel, and Jerusalem it's capital. More than 5,000 are on track to leave this... 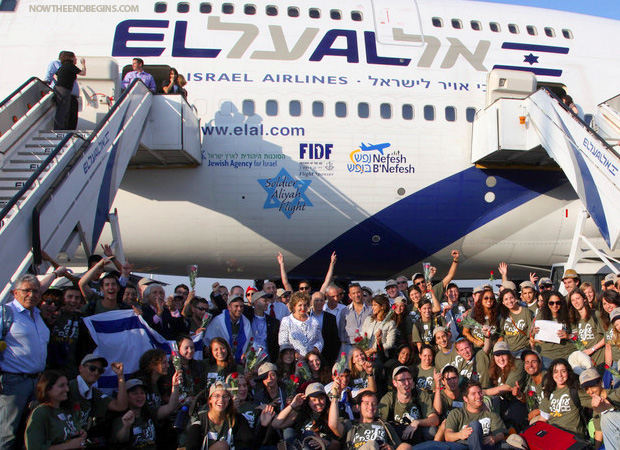 The promised regathering is happening

“Behold, I will bring them from the north country, and gather them from the coasts of the earth, and with them the blind and the lame, the woman with child and her that travaileth with child together: a great company shall return thither.“  Jeremiah 31:8

The AP reports this week that Jews in France are fleeing by the thousands to return to their ancestral home of Israel, and Jerusalem it’s capital. More than 5,000 are on track to leave this year, the most since after the Six-Day War in 1967. Well more than half of the world’s Jewish population now live in Israel, according to the Jewish Agency.

The bible promises that in the last days, God will regather His people from the four corners of the world where He had previously scattered them.

In March of 2013, the Daily Mail reported that for the first time in Israel’s modern existence, there were more Jews in Israel than anywhere else, including the United States. Census statistics revealed that Israel’s total population has reached eight million, with the surge in the Jewish community thought to have been fueled by returning members of the diaspora.

“Therefore say, Thus saith the Lord GOD; Although I have cast them far off among the heathen, and although I have scattered them among the countries, yet will I be to them as a little sanctuary in the countries where they shall come. Therefore say, Thus saith the Lord GOD; I will even gather you from the people, and assemble you out of the countries where ye have been scattered, and I will give you the land of Israel.” Ezekiel 11:16,17

In 2010, Prime Minister Benjamin Netanyahu declared that the prophecies of Ezekiel 37 have been fulfilled with the regathering of Israel. Netanyahu said that “Jews sprouted new branches and grew deep roots. Dry bones became covered with flesh, a spirit filled them, and they lived and stood on their own feet, as Ezekiel prophesied”.

We live in momentous and tumultuous times, times of great change and upheaval. But it is also a time where the ancient prophecies are coming true, and the promise of the Holy God of Israel to regather His people in the last days is being abundantly kept.

Those who bless you I will bless…