See the 1939 Flag of Palestine? What does it look like, are you surprised? Why, it is the Jewish flag of the land of Israel!... 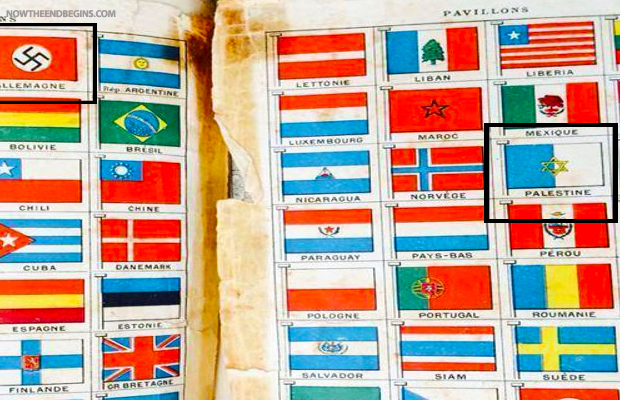 The Muslim world, and even much of the rest of the world, would have you believe that Israel does not belong to the Jews – but to the so-called Palestinians. It’s a lie from the pit of hell.

“In the same day the Lord made a covenant with Abram, saying, Unto thy seed have I given this land, from the river of Egypt unto the great river, the river Euphrates” Genesis 15:18 (KJV)

The land of Israel was given to the Jews thousands of years ago, by God:

“From the wilderness and this Lebanon even unto the great river, the river Euphrates, all the land of the Hittites, and unto the great sea toward the going down of the sun, shall be your coast.” Joshua 1:4 (KJV)

The fact is that Palestine is Israel – the Jewish homeland.

After the Romans conquered the Jews in the Jewish-Roman wars, the Romans renamed Israel after the Jews’ worst enemies — the Philistines — in order to further humiliate them. The term was first used to denote an official province in c.135 CE, when the Roman authorities, following the suppression of the [Jewish] Bar Kokhba Revolt, combined Iudaea Province with Galilee and the Paralia to form “Syria Palaestina”.

It was a Roman Emperor who first coined the name Palestine

In AD 135, the Emperor Hadrian blotted out the name “Provincia Judea” and renamed it “Provincia Syria Palaestina”. This was the Latin version of the Greek name and soon became a name to be used as an administrative unit. This name was shortened to Palaestina and the name “Palestine” was derived from it as a modern and anglicized version.

In other words, it was always Jewish.

Picture of the Official Flag of Palestine in 1939 Larousse-French Dictionary:

What you are looking at is a photograph of a Larousse-French dictionary printed in 1939. You will notice the official flag of Palestine on the right, with the Star of David on a blue and white background, and you will notice the Nazi flag in the upper-left, proving this was before 1945 and the end of the war.

1939 Palestinian Flag. What does it look like? Surprised? From Factual Israel:  This a Larousse French dictionary from 1939. In the appendix it lists all the then current flags of the world in alphabetical order. You’ll notice that for Germany at that time the flag was the Nazi one replete with Zwastika which proves that this was pre-1945 ( before 1945).

Now, alphabetically, look for the Palestinian Flag. YES , there is one. What does it look like? Surprised? Oh, but you thought (Mandate Jewish) Palestine was an Islamic Arab-,Turkish-, Circassian Sovereign State that the bad Jews took over , right?

From 1920-1948 a ( class ‘A’ Mandate) State of Palestine existed as per international law but it was, as all of its major institutions, Jewish. Until the 1960s, name “Palestine” resonated as something Jewish to European ears; the Muslims rejecting the name saying it didn’t belong. The 4,000 year old Jewish homeland or “Land of Israel” or the “Holy Land” were all synonymous!

The British as legal Mandatory over the Mandate managed or mismanaged the state partially with Jewish Auxilary until Jews regained official sovereignty in 1948, by declaring independence. The U.N. did not recreate Israel as some people claim. There are a lot of cultural and historic relics, artifacts and icons that validate the Jewish identity of Palestine. [1] – source

“And say unto them, Thus saith the Lord God; Behold, I will take the children of Israel from among the heathen, whither they be gone, and will gather them on every side, and bring them into their own land” Ezekiel 37:21 (KJV)