In an astonishing display of media malpractice, CBS News quietly released proof--two days before the election, far too late to reach the media and the public--that President Barack Obama... 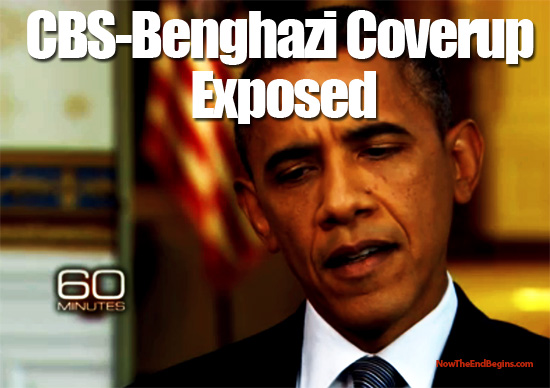 In an astonishing display of media malpractice, CBS News quietly released proof–two days before the election, far too late to reach the media and the public–that President Barack Obama lied to the public about the Benghazi attack, as well as about his later claim to have called the attack “terrorism” from the beginning.

CBS unveiled additional footage from its 60 Minutes interview with President Obama, conducted on Sep. 12 immediately after Obama had made his statement about the attacks in the Rose Garden, in which Obama quite clearly refuses to call the Benghazi an act of terror when asked a direct question by reporter Steve Kroft:

KROFT: Mr. President, this morning you went out of your way to avoid the use of the word terrorism in connection with the Libya Attack, do you believe that this was a terrorism attack?

OBAMA: Well it’s too early to tell exactly how this came about, what group was involved, but obviously it was an attack on Americans.  And we are going to be working with the Libyan government to make sure that we bring these folks to justice, one way or the other.

CBS News held onto this footage for more than six weeks, failing to release it even when questions were raised during the Second Presidential Debate as to whether Obama had, in fact, referred to the Benghazi attack as an act of terror before blaming it falsely on demonstrations against an anti-Islamic video. The moderator, CNN’s Candy Crowley, intervened on Obama’s behalf, falsely declaring he had indeed called the attack an act of terror in his Rose Garden statement, and creating the impression that Romney was wrong.

That exchange turned what would have been an outright win for Romney in the debate into a narrow win or possibly a loss–and it discouraged him from bringing up the issue again in the next debate or on the campaign trail. CBS News could have set the record straight, but held onto this footage, releasing it just before the election–perhaps to avoid the later charge of having suppressed it altogether.

Fox News’ Bret Baier, who has been following the timeline of events closely, noted in his analysis this morning:

These are two crucial answers in the big picture.  Right after getting out of the Rose Garden, where, according to the second debate and other accounts he definitively called the attack terrorism, Obama is asked point blank about not calling it terrorism. He blinks and does not push back.

Understand that this interview is just hours after he gets out of the Rose Garden.

How after this exchange and the CIA explanation of what was being put up the chain in the intel channels does the Ambassador to the United Nations go on the Sunday shows and say what she says about a spontaneous demonstration sparked by that anti-Islam video? And how does the president deliver a speech to the United Nations 13 days later where he references that anti-Islam video six times when referring to the attack in Benghazi?

There are many questions, and here are a few more.

Why did CBS release a clip that appeared to back up Obama’s claim in the second debate on Oct. 19, a few days before the foreign policy debate, and not release the rest of that interview at the beginning?

Why on the Sunday before the election, almost six weeks after the attack, at 6 p.m. does an obscure online timeline posted on CBS.com contain the additional “60 Minutes” interview material from Sept. 12?

Why wasn’t it news after the president said what he said in the second debate, knowing what they had in that “60 Minutes” tape — why didn’t they use it then? And why is it taking Fox News to spur other media organizations to take the Benghazi story seriously?

Whatever your politics, there are a lot of loose ends here, a lot of unanswered questions and a lot of strange political maneuvers that don’t add up.

Actually, the conclusion to be drawn is quite simple: CBS News, in an effort to assist President Obama’s re-election campaign, corruptly concealed information about two critical issues–namely, a terror attack and the president’s dishonesty about it. When the players in the Libya scandal face investigation, so, too, should CBS News and those in the mainstream media who have wantonly assisted the administration’s shameless lies. source – Breitbart