The Laodicean Liberals over at Christianity Today have decided that President Trump must be removed from office, and on December 19th published an editorial calling for his removal. Christianity Today is yet another group with ties to George Soros and have published numerous articles promoting his immigration policies. A little-known group called the Evangelical Immigration Table is a George Soros front organization of the National Immigration Forum and is ultimately traced directly back to Soros’ Open Societies Foundation.  So now that the impeachment plan by the Democrats has all but failed, you are going to start to hear just about every Laodicean Liberal evangelical begin to do the bidding of George Soros, who funds them all, and come against President Trump.

Christianity Today is yet another group with ties to George Soros and have published numerous articles promoting his immigration policies.

George Soros was not a happy man in 2016. He had spent hundreds of millions of dollars to buy the election for his puppet Hillary Clinton through his myriad social justice front groups and the fake news media, and yet, he still lost. I think it is safe to say that Soros was truly stunned, blindsided even, when Donald Trump handily won the election. Lost people like George Soros don’t recognize the moving of the hand of God when they see it, but you and I who are saved certainly do. George Soros has another trick up his sleeve for 2020, and I thought you should know what it is.

“Having a form of godliness, but denying the power thereof: from such turn away. For of this sort are they which creep into houses, and lead captive silly women laden with sins, led away with divers lusts, Ever learning, and never able to come to the knowledge of the truth.” 2 Timothy 3:5-7 (KJV)

Going back as far as 2010, evidence that George Soros had slithered his way into the Laodicean evangelical circles began popping up. National Review reported that a group called the Sojourners, calling themselves a “progressive evangelical” organization, had begun receiving funds from the Open Society Institute which is funded by George Soros. In addition to that, the Sojourners also take funds from multiple globalist New World Order groups. Want to know why it seems that George Soros is everywhere? Because he is.

Besides the George Soros grants, for instance, there are two 2006 grants from the infamous Tides Foundation totaling $72,106; a Ford Foundation grant in 2008 for $100,000; a Rockefeller Brothers Fund grant for $100,000 in 2005; and a $50,000 grant from the Wallace Global Fund in 2008. The Wallace Global Fund also supports ACORN and a cornucopia of population-control groups. Three grants, totaling $20,000 between 2005 and 2007, are from the Streisand Foundation in California. Yes, that Streisand foundation. (That’s just funny.) Other recipients of Streisand philanthropy include People for the American Way and Planned Parenthood Federation of America. source

As you can see from this screenshot from the Sojourners site taken today, they look exactly like a religious version of ANTIFA. They’re all about social justice, “democracy”, and all the others George Soros talking points. It gets even worse when you start scrolling the page, so I recommend you click and check it out. 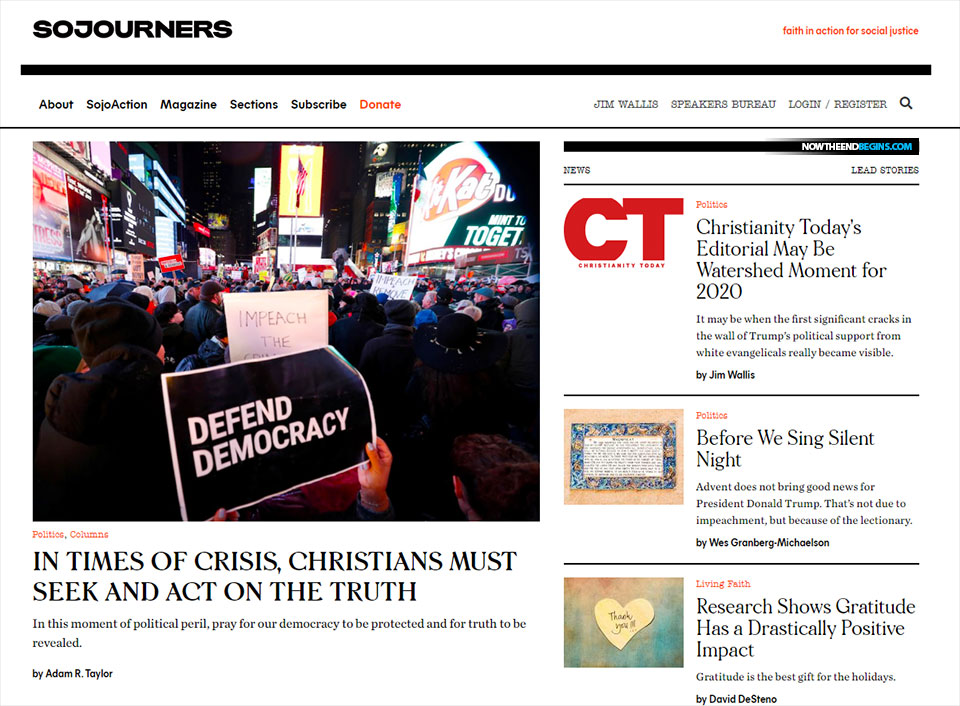 The Laodicean Liberals over at Christianity Today have decided that President Trump must be removed from office, and on December 19th published an editorial calling for his removal. Christianity Today is yet another group with ties to George Soros and have published numerous articles promoting his immigration policies. A little-known group called the Evangelical Immigration Table is a George Soros front organization of the National Immigration Forum and is ultimately traced directly back to Soros’ Open Societies Foundation.

So now that the impeachment plan by the Democrats has all but failed, you are going to start to hear just about every Laodicean Liberal evangelical begin to do the bidding of George Soros, who funds them all, and come against President Trump. Progressive evangelical Liberals like Beth Moore, Russell Moore and John Piper are all coming against Trump and have been since he was elected. George Soros is sitting lean back in his easy chair, smoking a stogie, and laughing over how easily deceived Bible-ignorant Christians are, and how easy they are to control.

If you don’t recognize the two women I have placed in the main photo with George Soros, you are looking are Kay Warren on the left and Beth Moore on the right. Kay Warren is best known as the wife of Rick Warren, the smooth-talking Chrislam purpose-driven hustler who refers to Mormons and the Pope as brothers-in-Christ and who is a member of the globalist organization, Council on Foreign Relations. Beth Moore is the ‘woke’ Social Justice feminist who has lead captive many weak women in the Southern Baptist Convention and broader evangelicalism. Both are attacking POTUS.

I am not an evangelical and I am not a Protestant. No, my faith goes back to those First Century Bible believers who risked their lives to preserve Bible portions as they were forced into hiding by first the Roman government and then by the Roman Catholic Church 3 centuries later. I am a Bible believing Baptist. And as such, I know that Donald Trump is not a saved man, and that he is surrounded by false teachers like Paula White. Pray for our president, that God will not only continue to use him mightily as He has been doing, but that Donald Trump will get saved.