Hey, remember the days when Liberty University used to be a Christian college? Not so much anymore. Proof of that is yesterday's speech by anti-American Socialist and candidate for... 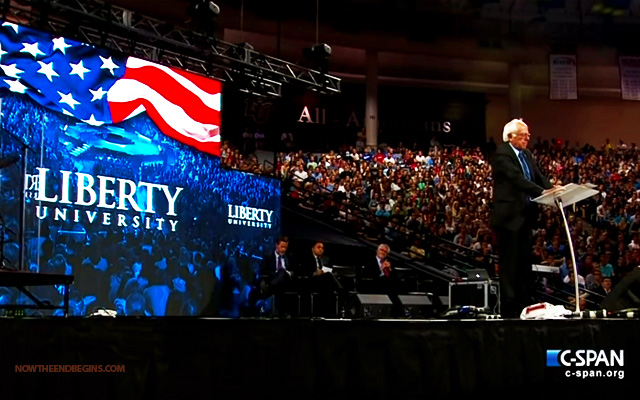 Liberty University, you should be ashamed of yourselves for allowing this anti-American and absolutely anti-Christian trash in your school.

Hey, remember the days when Liberty University used to be a Christian college? Not so much anymore. Proof of that is yesterday’s speech by anti-American Socialist and candidate for president Bernie Sanders who opened his speech with these words: “I believe in women’s rights (for abortion), and the right of a woman to control her own body (kill the baby). I believe in gay right’s and in gay marriage. Those are my views and it is no secret.” The reaction from the fabled “christian” university? Thunderous applause and a standing ovation. Nighty, night, Liberty U, may you rest in piece. Welcome to Laodicea.

Watch as much of this trash as you can stand to absorb. Bernie Sanders wants to find the “common ground” between him and you. But unless  you are a pro-gay, pro-abortion, pro-Socialist, what type of common ground are you ever going to find? A post-Christian America is a scary, scary place to be, but so it is after 7 years of the reign Muslim-raised King Barack Hussein Obama. Bernie Sanders wants to take what Obama started, and jack it up even further if you can imagine such a thing.

The applause for him saying he is “pro-gay” and “pro-abortion” starts around 0:50, and the standing ovation starts at 27:40. People will say that it was only his “bussed-in supporters” who are cheering, well who can tell the difference between bussed-in supporters and students by watching the video? Shame on YOU, Liberty University, for allowing this mess. But there are as many people cheering in the back of the stadium as there are in the front. Are they ALL bussed-in supporters? Hmm…I think not.

Sanders kept saying “I know you as a Christian school and I disagree on many issues”, but as you watch the video he got huge applause every time he spoke in favor of abortion and gay rights. There didn’t seem to be much “disagreement” from the sold-out crowd at Liberty. 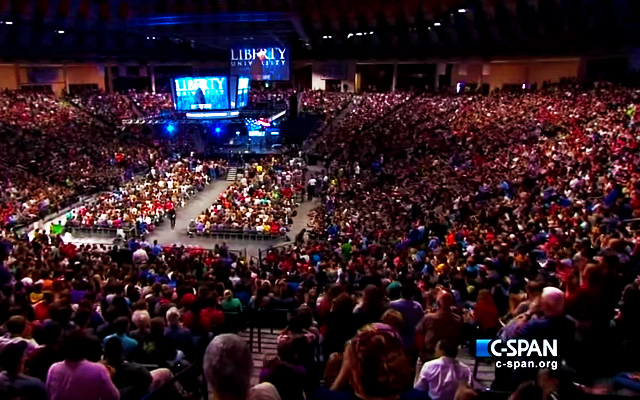 Bernie Sanders was rewarded with a standing ovation that went all the way from the front to the back of the packed house. I guess they really liked it.

Sanders constantly hammered home his Socialist mantra of wealth redistribution, and his supposedly Christian audience cheered wildly every time. This was not a speech, this was indoctrination of the highest order.

Liberty posted this gushing tweet just prior to the arrival of the pro-Gay Marriage and pro-Abortion Senator Bernie Sanders:

We are delighted to welcome @SenSanders to the @LUConvo stage! Watch live at 10:30 on http://t.co/SgRfEOMc6s.

Liberty University, you should be ashamed of yourselves for allowing this anti-American and absolutely anti-Christian trash in your school.

“Now the Spirit speaketh expressly, that in the latter times some shall depart from the faith, giving heed to seducing spirits, and doctrines of devils; Speaking lies in hypocrisy; having their conscience seared with a hot iron;” 1 Timothy 4:1,2 (KJV)

This is how Liberty officially reported on the event, funny how they leave out all mention of the constant references in Sander’s speech to same-sex marriage, abortion and wealth redistribution.