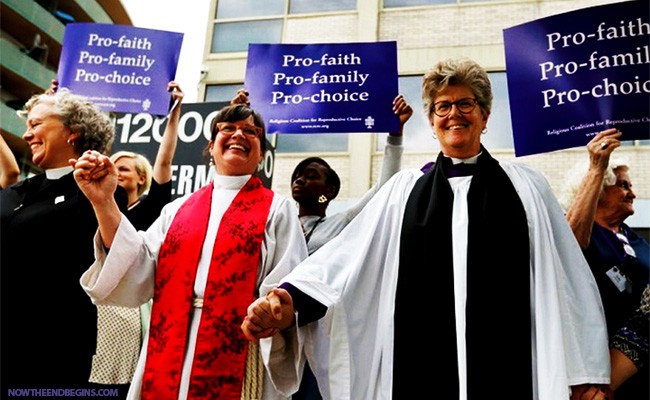 They concluded, “Our religious traditions call us to offer compassion, not judgment. People who work for Planned Parenthood give care and respect to those in need, doing God’s work. For this we are grateful.”

“Let no man deceive you by any means: for that day shall not come, except there come a falling away first,” 2 Thessalonians 2:3 (KJV)

EDITOR’S NOTE: Honestly, with this story, I don’t even know where to begin. Do we discuss the great “falling away” from Bible truth prophesied in 2 Thessalonians? Do we go to Revelation 3 where it talks about the end times Church of Laodicea that Jesus spues out of His mouth? Perhaps Revelation 18 where a voice from Heaven warns “come of her, my people, that ye be not partakers of her sins, and that ye receive not of her plagues.” Or maybe all three?  Any way you slice it, watching female “pastors” preaching that abortion is a “blessing from God” is absolutely a fulfillment of last days Bible prophecy about the condition of the professing Christian church right before the Rapture.

In Ohio, United Methodist Church “pastor”, Reverend Laura Young, says she believes pro-life protesters in front of Planned Parenthood and other abortion facilities have “misguided faith.” In fact, she thinks these clinics should be blessed, which is why she went out to an abortion facility called Preterm on October 8th in Cleveland. In 2014, Preterm was involved in the abortion-related death of Lakisha Wilson.

How the Bible feels about female “pastors”: “But I suffer not a woman to teach, nor to usurp authority over the man, but to be in silence.” 1 Timothy 2:12 (KJV)

Young explained her acceptance of abortion like this: “Christianity, like most faiths, is founded on love. Watching protesters shouting judgment and hate based on what they call religion is horrible. Is that loving God? Is that loving your neighbor as yourself?”

Welcome to the Church of Laodicea, your last days counterfeit “christian” experience. Click for more…

Think Progress reports that the group hopes their “blessing” will protect Preterm from “preachy protesters, as well as encourage the strength and bravery of those providing and relying on its services.” Young plans to go out to other abortion facilities in the state if their event in Cleveland is successful.

Young also says religious groups are fueling the so-called war on women. She explained, “Women are being attacked at a moral level by the radical Religious Right. They’ve hijacked the political discussion. This event is an opportunity for progressive religious leaders to stop the silence. We need to be in the conversation.”

The abortion reverend heads up a group called the Ohio Religious Coalition for Reproductive Choice, and they run an “all-options” counseling hotline for women facing crisis pregnancies. She said, “It breaks my heart to know women are sitting in pews across the country feeling shamed, believing that they’re cursed for making this decision. That’s a question I get a lot on the phone, ‘Am I going to hell?’ When God instead is there to support women through it all.”

On their website, the group says their mission is to “ensure reproductive choice through education, advocacy, and counseling. The Coalition seeks to give clear voice to the reproductive issues of people of color, those living in poverty, and other underserved populations.”

As LifeNews previously reported, on July 29, the Planned Parenthood Clergy Advocacy Board said the undercover videos exposing the organization’s organ harvesting business are simply an attack on women’s health care. Jeffrey Walton from the Institute on Religion and Democracy reports that the board is made up of religious leaders from the United Church of Christ, Episcopal Church and American Baptist Churches as well as clergy from Reformed Jewish and Unitarian Universalist congregations.

In a statement the clergy said, “As faith leaders committed to justice, honesty, and liberty, we are troubled by the decades-long campaign of harassment against Planned Parenthood and those they serve. Our faiths demand care for those marginalized by poverty and other oppressions. Faith leaders have supported Planned Parenthood for nearly 100 years because of our shared goals: every person — regardless of income, race, or religion — deserves access to safe, affordable, high-quality health care.”

They concluded, “Our religious traditions call us to offer compassion, not judgment. People who work for Planned Parenthood give care and respect to those in need, doing God’s work. For this we are grateful.”

Rev. Franklin Graham and Baptist theologian Albert Mohler commented on Planned Parenthood’s lucrative business after the footage was released. Rev. Graham said,“Abortion is a sin and is clearly murder in God’s eyes. The people who perform it have no conscience, so I’m not at all surprised that they would be selling organs, tissue, and body parts from babies. Planned Parenthood should be put out of business. They’ve done enough damage.”

In some ways, Mohler used even stronger language than Rev. Graham to describe Planned Parenthood and said they “stand at the epicenter of the Culture of Death.” He also dismissed the abortion giant’s justifications for their executive’s unbelievable comments.

He said, “They are not going to be able to explain this video away. I have no reason to believe that the video is anything less than totally credible. But, even if Planned Parenthood somehow finds a way to evade justice in terms of criminal activity, the part of the video that Planned Parenthood does not –and cannot — deny reveals their senior medical director enjoying a conversation over a meal in which she describes tearing apart the bodies of unborn human beings in order to get the desired organ: “I’m gonna basically crush below, I’m gonna crush above, and I’m gonna see if I can get it all intact.” source