Democrat Hillary Clinton and Republican Donald Trump faced off for the first time on Monday in a high stakes presidential debate that could shift the course of the neck-and-neck 2016 campaign for the White House.

What I Saw At The Presidential Debates 2016

Democrat Hillary Clinton and Republican Donald Trump faced off for the first time on Monday in a high stakes presidential debate that could shift the course of the neck-and-neck 2016 campaign for the White House.

The highly anticipated clash between the Democratic former secretary of state and Republican real estate tycoon has generated wide interest nationally and internationally six weeks before the Nov. 8 election.

Fifteen minutes into the debate, and things are off to a relatively slow start with both candidates moving cautiously. Then Donald Trump began to assert himself while talking about his plan to bring jobs back to America. Lester Holt tried multiple times to steer the conversation but Trump wouldn’t budge. Hillary was obviously very well rehearsed, but with the same, tired old talking points she has been saying for years without ever delivering on them. I remember her campaign for senator some years ago where she made incredible promises that never materialized. 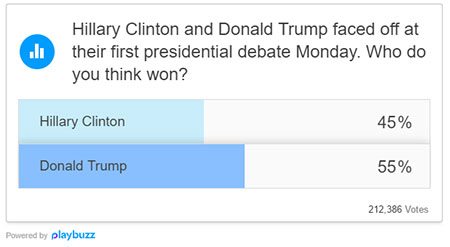 Trump began to show a little fire, and pressed Hillary hard to defend her previous support of NAFTA, which of course she was unable to do. Her Parkinson’s meds seem to be serving her well so far, as she seems low key but fairly stable. Trump is obviously the more vociferous candidate, with Hillary trying to catch up.

Hillary showed her first head-wobble of the evening, and her eyes began to glass over slightly. Lester Holt asked Trump why he hasn’t released tax records, and Trump swatted him away and continued to hammer ahead on his key points from his rallies. Trump got the first crowd outburst of the evening by saying he would “release his tax returns when Hillary released her 33,000 deleted emails”. Hillary fired back by accusing Trump of not paying any Federal Income tax, and saying Trump is “hiding something”. Trump tells Hillary that her illegal email server “was not a mistake but it was deliberate” deception. So far no major mistakes or no knockout blows on either side. Hillary now accusing Trump of refusing to pay his contractors.

Lester Holt asked about race. Hillary brought up recent racials shootings, chastising the police who she said need to do more. She then segued into gun control, and said that “gun violence” is the problem. Trump’s 2 minutes focused on the need for law and order. Hillary’s eyes getting glassier and she looks a little tired. She kept coming back to the need to remove guns from the “hands of those who will do harm”. Trump fires back by reminding people of Hillary’s use of the term “super predator“. Trump talks about his heavy speaking schedule, and how Hillary “stayed home a lot”. Lester Holt asks Trump about his support for the Birther Movement, and he responds with the fact that Sidney Blumenthal, who works for Hillary’s campaign, actually started the Birther controversy.

Hillary attempts to go for the throat by calling Trump a racist. Trump fires back by reminding Hillary how badly she treated Obama when she ran against him in 2008. Trump also reminds people how he broke down racial barriers in Palm Beach country clubs. Hillary slurs her words for just a moment, she seems to be losing steam and focus rapidly. During segment on cyber-security Trump brought up what the hack of DNC emails revealed about the scheme to rob Bernie Sanders of the nomination.

Trump says Hillary and Obama started ISIS by withdrawing troops too soon from Iraq. Hillary blamed Bush. Seriously. She did. Trump says NATO needs to pay their fair share. While there are no knockout blows so far, Trump is clearly in control. Hillary brings up the Iran Nuclear Treaty hoax that Obama forced on America, calls Trump a warmonger who can’t be trusted with nuclear codes. Trump says Hillary unable to deal with Russia, calls Iran Nuclear Treaty a mess.