The Most Prescribed Drug In America Is Anti-Psychotic Medication Abilify

The FDA says that the way Abilify works is “unknown.” Unknown! As in, we have no idea why this medication seems to help people with bipolar disorder. But... 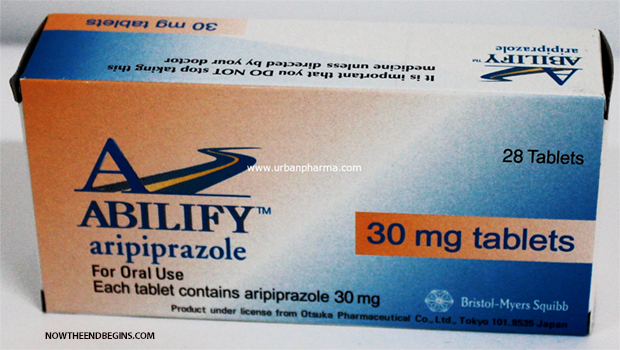 Abilify is now the most-widely sold and prescribed drug on the market. What it is being used to treat? Just about everything.

Quick: what’s the top-selling drug in the United States?

Fact: At least 34 school shootings and/or school-related acts of violence have been committed by those taking or withdrawing from psychiatric drugs resulting in 167 wounded and 78 killed (in other school shootings, information about their drug use was never made public—neither confirming or refuting if they were under the influence of prescribed drugs).

And yet, the FDA says that the way Abilify works is “unknown.” Unknown! As in, we have no idea why this medication seems to help people with bipolar disorder. But go ahead and try it anyway, since it seems to work somehow.

Question: What one thing have nearly all serial shooters had in common at the time they did the killing?

Packaging Disclaimer: “Note, this medicine may cause psychosis, hallucinations, or the inability to distinguish between fantasy and reality.”

Abilify’s makers, Otsuka America, say they know. As noted (and critiqued) in the medical journal PLOS Medicine, Abilify’s advertisements say that the drug works “like a thermostat to restore balance.”

A spokesperson for Otsuka denied that the advertising is at odds with the science.  “Our promotional activities,” the company said, “focus on the description of the mechanism of action of aripiprazole as it is written in the USPI,” the standardized United States Product Insert.