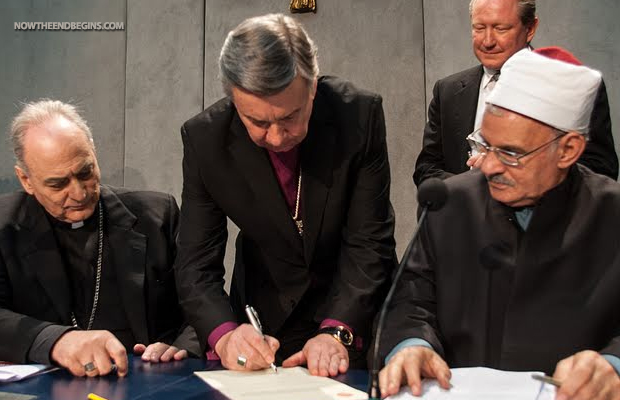 The declaration commits the signatories to do everything in their power within their faith communities to work to free the estimated 35 million people enslaved across the world by 2020.
by Geoffrey Grider December 2, 2014
NOW THE END BEGINS SHARE:

Rome is very smart, always has been. They know that in order to unite the faiths, they must focus on humanitarian projects that nearly everyone can agree on and work together to try and solve. It doesn’t matter whether it’s about poverty, perceived injustice, abortion, slavery or any other subject. These are all mental conditioning exercises that Pope Francis is conducting to get all the religions into the same tent. Once everyone is together, Rome will be the leader. And as you can see, it’s working beautifully.

Pope Francis was joined by the Hindu guru Mata Amritanandamayi, known as Amma, as well as Buddhist, Anglican, Orthdox, Jewish, Shiite and Sunni Muslim leaders in signing a joint declaration at an unusually high-profile ceremony inside the Vatican walls.

The declaration commits the signatories to do everything in their power within their faith communities to work to free the estimated 35 million people enslaved across the world by 2020.

“In the eyes of God, each human being is a free person, whether girl, boy, woman or man, and is destined to exist for the good of all in equality and fraternity,” the declaration read.

Francis has made eliminating modern-day slavery one of the key priorities of his pontificate, inspired by his ministry in the slums of Buenos Aires. Earlier this year, the Vatican launched the Global Freedom Network, a multifaith initiative to encourage governments, businesses, educational and faith institutions to rid their supply chains of slave labor.

One of the network’s founding members, the Walk Free Foundation, estimates that five countries account for 61 percent of the world’s population living in slavery: India, with an estimated 14.2 million people enslaved, China, Pakistan, Uzbekistan, and Russia.

Read the rest of the story on the Star-Tribune…