Pope Francis called for inter-religious dialogue "so that there will be an end of all forms of fundamentalism".... 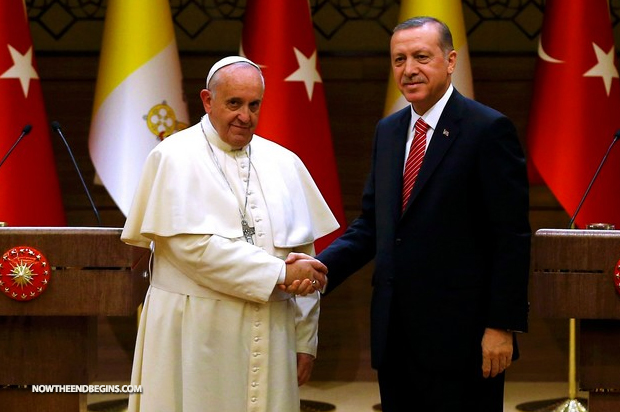 Francis called for inter-religious dialogue “so that there will be an end of all forms of fundamentalism and terrorism which gravely demean the dignity of every man and woman and exploit religion.”

“And upon her forehead was a name written, MYSTERY, BABYLON THE GREAT, THE MOTHER OF HARLOTS AND ABOMINATIONS OF THE EARTH. And I saw the woman drunken with the blood of the saints, and with the blood of the martyrs of Jesus: and when I saw her, I wondered with great admiration.” Revelation 17:5,6

The term “fundamentalism” is a very broad brush and could be talking about many different things. Christian fundamentalists are those who believe in the bible and bible doctrine, and attempt to do their best to reach a lost and dying world for Jesus Christ. Christian fundamentalists, like Baptists, are also those who historically have sought to expose the Catholic church as the Harlot found in Revelation 17 and 18. It’s kind of hard to have a One World Religion if there are those pesky bible believers that are constantly outing the Pope and the harlot Vatican system.

Make no mistake about it, the overarching goal of Pope Francis is to erase the lines of distinction between all Christian denominations and absorb them in to the Roman Catholic system. He will use any means at his disposal – abortion, world hunger, poverty, terrorism – as a pretext to “lay down our differences and unite”. The Pope isn’t selling, he’s buying.

The Jerusalem Post reports today that Pope Francis in Turkey called for an end to all forms of fundamentalism on Friday and said fighting hunger and poverty, rather than military intervention alone, were key to stopping Islamist militants carrying out “grave persecutions” in Syria and Iraq.

Speaking at the start of a three-day trip to Turkey, Francis said “terrorist violence” showed no sign of abating in Turkey’s southern neighbors, where Islamist insurgents had declared a caliphate and persecuted Shi’ite Muslims, Christians and others who do not share their ultra-radical brand of Sunni Islam.