Pope Francis told U.N. Secretary General Ban Ki-moon on Friday that the world body must do more to help the poor and should encourage the "legitimate redistribution" of wealth.... 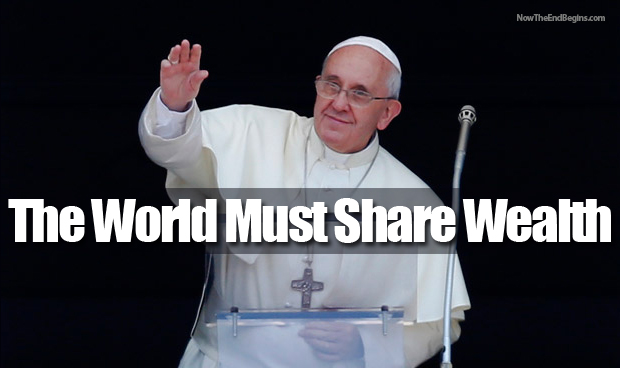 VATICAN CITY (Reuters) – Pope Francis told U.N. Secretary General Ban Ki-moon on Friday that the world body must do more to help the poor and should encourage the “legitimate redistribution” of wealth.

Francis, who since his election last year has often called for significant changes to economic systems, made his comments in an address to Ban and heads of many U.N. agencies meeting in Rome.

Click image to see a partial listing of the hundred of billions of dollars in real estate, fine art, and gold bullion owned by the world’s largest corporation – The Vatican

“In the case of global political and economic organization, much more needs to be achieved, since an important part of humanity does not share in the benefits of progress and is in fact relegated to the status of second-class citizens,” Francis said.

Francis, an Argentine, is the first non-European pope in 1,300 years and the first-ever Latin American pontiff. He has consistently used his meetings with world leaders, including U.S. President Barack Obama in March, to champion the cause of the world’s have-nots.

He told the U.N. officials that while there had been a welcome decrease in extreme poverty and improvements in education “the world’s peoples deserve and expect even greater results”.

A contribution to equitable development could be made “both by international activity aimed at the integral human development of all the world’s peoples and by the legitimate redistribution of economic benefits by the State …,” he said.

An awareness of everyone’s human dignity should encourage everyone “to share with complete freedom the goods which God’s providence has placed in our hands,” Francis said.

The pope, who was known as the “slum bishop” in his native Buenos Aires because of his frequent visits to shantytowns, is has said often since his election that he wants the Catholic Church to be closer to the poor.

He told the United Nations leaders that the organization’s future sustainable development goals must be formulated in a way to have a “a real impact on the structural causes of poverty and hunger”.

In the past 14 months since his election, Francis has issued several strong attacks on the global economic system, saying in one speech last September that it could no longer be based on “a god called money”.

In Friday’s address to the U.N. leadership, Francis also appeared to be taking a dig at recent sessions by two United Nations committees – one on sexual abuse and the other on torture – which criticized the Catholic Church’s opposition to abortion.

Church groups said such criticisms were a violation of freedom of religion. He told Ban that “life is sacred and inviolable from conception to natural death”. Ban also renewed an invitation for the pope to address the United Nations in New York. source – Yahoo News