"Don't proselytize; respect others' beliefs. “We can inspire others through witness so that one grows together in communicating. But the worst thing of all is religious proselytism, which paralyses: 'I am talking with you in order to persuade you,' No. Each person dialogues, starting with his and her own identity. The church grows by attraction, not proselytizing,” the Pope said." 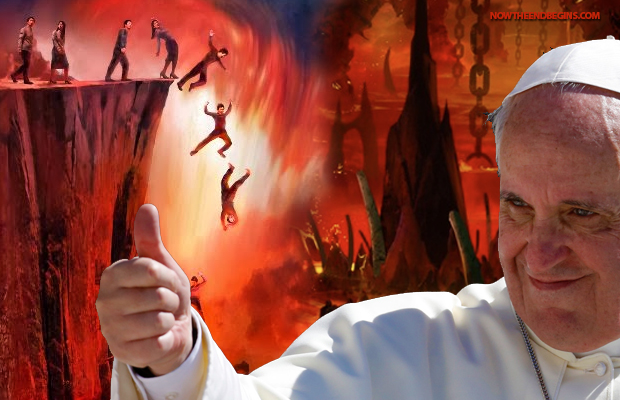 If we are not to convert the lost, then why are we here?

“Brethren, if any of you do err from the truth, and one convert him; Let him know, that he which converteth the sinner from the error of his way shall save a soul from death, and shall hide a multitude of sins.” James 5:19,20

Pope Francis, in an interview with Argentine magazine “Viva” recently, gave his Top 10 suggestions on how people could have a “happier and more fulfilled life”. Two of his pieces of advice bear closer examination.

Pope Francis wants you to “be kind” to lost people, and to not try to convert them to save them from Hell. Click image to see a picture of Hell.

Suggestion #5 said “Sundays should be holidays. Workers should have Sundays off because “Sunday is for family,” he said.” I find it interesting that he didn’t say that Sunday was a day for church and worship of Jesus Christ. Instead, he just said it “should be for family”.

Suggestion #9, however, was a real doozy. “Don’t proselytize; respect others’ beliefs. “We can inspire others through witness so that one grows together in communicating. But the worst thing of all is religious proselytism, which paralyses: ‘I am talking with you in order to persuade you,’ No. Each person dialogues, starting with his and her own identity. The church grows by attraction, not proselytizing,” the Pope said.”

Synonyms for “proselytize” – evangelize, convert, save, redeem, win over, act as a missionary, advocate. Now why do you think that the Pope would be against believers doing any of those things? I thought those things were commands in the bible to the believer to go out and win the lost.

The bible, on the other hand, has this to say in regards to the Pope’s opinion on converting lost sinners:

“Preach the word; be instant in season, out of season; reprove, rebuke, exhort with all longsuffering and doctrine. For the time will come when they will not endure sound doctrine; but after their own lusts shall they heap to themselves teachers, having itching ears; And they shall turn away their ears from the truth, and shall be turned unto fables.” 2 Timothy 4:2-4

Are you listening, Pope Francis?