Rick Warren announced his plans to attend the event during the Sunday morning worship service at the Lake Forest, CA church. "Next month, Pope Francis is coming to America for a world gathering on families," he told the congregation. "I'm not a Catholic, and we have many differences with Catholics. But they love the Lord and we have much in common with that - we believe in the Bible, and the Trinity, and in Jesus and the resurrection." 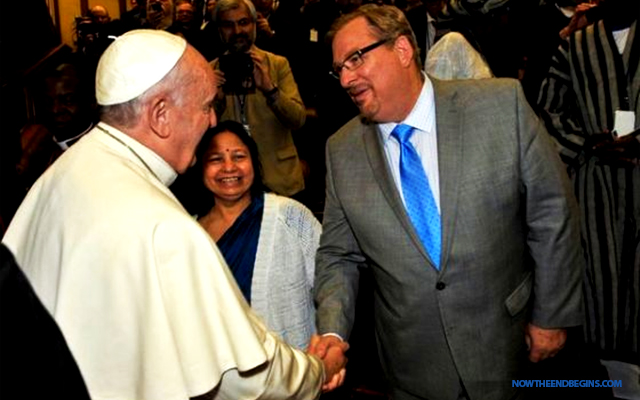 Rick Warren, senior pastor of Saddleback Church, has announced he will be speaking in Philadelphia later this month at the World Meeting of Families event to commence Pope Francis’ highly anticipated visit to the United States.

EDITOR’S NOTE: False Prophet and soon to be global king Pope Francis knows how to build a team, I’ll give him that. He chose Laodicean pastor and Chrislam founder Rick Warren to close his little traveling road show later this month at the World Meeting of Families. In that speech, look for Warren to speak to “all the common ground we have with Catholics“, and how “Pope Francis is our pope“, and all that other nonsense that paid shills get paid to say. Hate to break it to you, Rick, but the Vatican does not believe or teach the Bible. They worship Mary, they pray to idols, they think priests can forgive sins, and they falsely teach that a wafer of bread becomes the body of Jesus. But don’t let that stop you from soaking up the spotlight and fleecing the flock.

“Beware of false prophets, which come to you in sheep’s clothing, but inwardly they are ravening wolves.” Matthew 7:15 (KJV)

Rick Warren announced his plans to attend the event during the Sunday morning worship service at the Lake Forest, CA church. “Next month, Pope Francis is coming to America for a world gathering on families,” he told the congregation. “I’m not a Catholic, and we have many differences with Catholics. But they love the Lord and we have much in common with that – we believe in the Bible, and the Trinity, and in Jesus and the resurrection.”

“There are probably going to be a million people in Philadelphia at this final event with Pope Francis, and he’s asked me to be the final speaker,” the Purpose Driven Life author continued amid cheering and applause.

According to its website, the World Meeting of Families is a “week-long international event of prayer, catechesis, and celebration that draws participants from around the globe.” The 8th annual event, which organizers say will be attended by up to two million people, seeks to “strengthen the bonds between families and to witness the crucial importance of marriage and the family to all society.”

GRAPHIC WARNING: If you are a Bible believer, listening to Rick Warren extolling the praises of Roman Catholic King Francis will make you nauseous. But if you ever wondered what a paid liar looks and sounds like, then please watch this video.

While acknowledging there are differences between the two groups, Pastor Rick Warren has in the past called on non-Catholic Christians to join with Pope Francis and the Catholic Church in pursuit of common goals, such as the sanctity of life and the sanctity of marriage. In November, the pastor joined the leader of the Roman Catholic Church and 30 other global religious leaders for an interfaith Vatican conference on marriage and family, where he spoke on the “Biblical Meaning of Marriage.” “It’s great to be with leaders from different streams of Christianity from all over the world,” Warren said at the time. “Although we have some differences, we all love Jesus Christ and we all want marriage and families to be healthy and strong.”

“Wherefore come out from among them, and be ye separate, saith the Lord, and touch not the unclean thing; and I will receive you,” 2 Corinthians 6:17 (KJV)