Pope Francis offered Ramtoolah a memorial medal created for his recent papal trip to Africa, and also the copy of the problematic Abu Dhabi statement, which says in part that the “diversity of religions” is “willed by God.” The pope signed the “Document on Human Fraternity for World Peace and Living Together,” with Ahmad el-Tayeb, Grand Imam of al-Azhar Mosque in Egypt, during an interreligious meeting in Abu Dhabi in February.

Pope Francis offered Ramtoolah a memorial medal created for his recent papal trip to Africa, and also the copy of the problematic Abu Dhabi Chrislam statement, which says in part that the “diversity of religions” is “willed by God.”

2019 has become the seminal year in which Pope Francis was finally able to push things to such a point where the One World Religion of Chrislam could take root and flourish, as you will see in this article today of the pope’s gifts to a mosque in nation of Mauritius in East Africa. The main gift sent through emissaries by the Roman pope with a signed copy of his ‘universal peace document‘ which is actually the covenant of Chrislam.

“And upon her forehead was a name written, MYSTERY, BABYLON THE GREAT, THE MOTHER OF HARLOTS AND ABOMINATIONS OF THE EARTH. And I saw the woman drunken with the blood of the saints, and with the blood of the martyrs of Jesus: and when I saw her, I wondered with great admiration.” Revelation 17:5,6 (KJV)

If you are saved, then it is truly exciting to watch long-awaited Bible prophecy not only coming to pass  but leaping off the pages in the process! We are not in darkness that this all should overtake us a thief, as 1 Thessalonians 5:4 (KJV) tells us, we have The Book, we can see what’s coming and we know how it all winds up. But to those of you who are lost, these must be frustrating, baffling and scary times. But you can change all that, in fact, you can change everything in a moment by doing one, simple thing. You can believe on the Lord Jesus Christ and be saved. Time’s running out, don’t wait much longer.

FROM LIFE SITE NEWS: Cardinal Maurice Piat, Bishop of Port-Louis, Mauritius, presented two gifts to a local mosque on behalf of Pope Francis last week, one a copy of the controversial Abu-Dhabi statement which claims that a diversity of religions is willed by God.

Piat went to the Jummah Mosque on September 24 to present Nissar Ramtoolah, president of the mosque, with the two gifts from Pope Francis, according to a translated report from the Diocese of Port-Louis. Photos of the exchange show the cardinal dressed as a layman all in white. 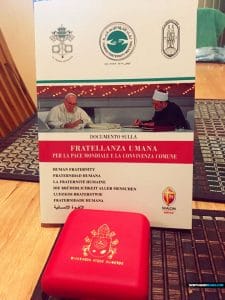 The diocese’s report said the pope was touched by the gesture of brotherhood that the Jummah Mosque made for him during his recent apostolic visit to Mauritius, which was sending of a bouquet of flowers to Port Louis diocese when he was there.

The pope “also wanted to show his esteem and affection for the Muslim community,” according to the report. Francis visited the nations of Madagascar, Mozambique, and Mauritius earlier this month. Mauritius is an island country in the Indian Ocean, located off the eastern coast of Africa.

Pope Francis offered Ramtoolah a memorial medal created for his recent papal trip to Africa, and also the copy of the problematic Abu Dhabi statement, which says in part that the “diversity of religions” is “willed by God.”

The pope signed the “Document on Human Fraternity for World Peace and Living Together,” with Ahmad el-Tayeb, Grand Imam of al-Azhar Mosque in Egypt, during an interreligious meeting in Abu Dhabi in February.

The statement has continued to receive criticism in the months following its release for the assertion that God willed the diversity of religions, which many say is in conflict with the Catholic faith.

Pope Francis has made repeated affirming statements about Islam, and has also been dismissive of Islamist violence. He ignited controversy in 2016 when he likened Islamic violence to individual violent acts committed by some Catholics.

Asked by a journalist on the papal plane in August of that year why he never spoke about Islamic violence, the question coming in the wake of the brutal murder of French priest Father Jacques Hamel – who was beheaded in the name of Islam as he celebrated Mass, the Pope said he didn’t like to speak about Islamic violence.

A group of Muslims who had converted to the Catholic faith wrote an open letter to Francis in December 2017 questioning, “If Islam is a good religion in itself, as you seem to teach, why did we become Catholic? Do not your words question the soundness of the choice we made at the risk of our lives?” the converts asked in the letter. READ MORE