Pope Francis said that people cannot be Christians without the Church, explaining that Christian identity is rooted in it and that believers cannot stand alone.... 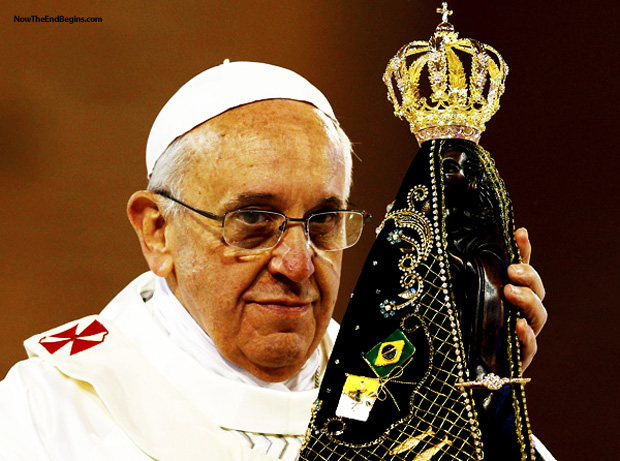 Pope Francis consecrated the world to the Immaculate Heart of Mary at an October 13 Mass in St. Peter’s Square, in the climactic ceremony of a Marian Day celebration.
by Geoffrey Grider May 16, 2014
NOW THE END BEGINS SHARE:

Francis also said that aliens will be baptized when they arrive

“For by grace are ye saved through faith; and that not of yourselves: it is the gift of God: Not of works, lest any man should boast.” Ephesians 2:8,9

Vatican City, Rome – Pope Francis said that people cannot be Christians without the Church, explaining that Christian identity is rooted in it and that believers cannot stand alone.

“Our Christian identity is belonging to a people: the Church. Without this, we are not Christians. We entered the Church through baptism: there we are Christians,” Francis said during Mass on Thursday, Vatican Radio reported.

Pope Francis consecrated the world to the Immaculate Heart of Mary at an October 13, 2013 Mass in St. Peter’s Square, in the climactic ceremony of a Marian Day celebration.

“A Christian without a church is something purely idealistic, it is not real,” the Roman Catholic Church leader argued. He said that one cannot “understand a Christian alone” any more than “Jesus Christ alone” can be understood.

The Vatican leader urged believers to “ask for the grace of memory, the memory of the journey that the people of God has made,” as well as for personal memory – “What God did for me, in my life, how has He made me walk.”

He added that the “grace of hope” is also necessary for Christian identity, explaining that he does not mean optimism, but “something else.” “Ask for the grace to renew the covenant with the Lord who has called us every day,” Francis said.

During Mass on Monday, Francis also theorized about alien life forms, and suggested that even Martians should be welcomed to be baptized as well.

“If – for example – tomorrow an expedition of Martians came, and some of them came to us, here … Martians, right? Green, with that long nose and big ears, just like children paint them … And one says, ‘But I want to be baptized!’ What would happen?” Pope Francis remarked, and told the audience that baptism is open to everyone. He also recalled the words of Peter: “If then God gave them the same gift He gave to us when we came to believe in the Lord Jesus Christ, who was I to be able to hinder God?” source – Christian Post