Pope Francis stood Saturday for two minutes of silent prayer facing east in one of Turkey's most important mosques, a powerful vision of Christian-Muslim understanding at a time when... 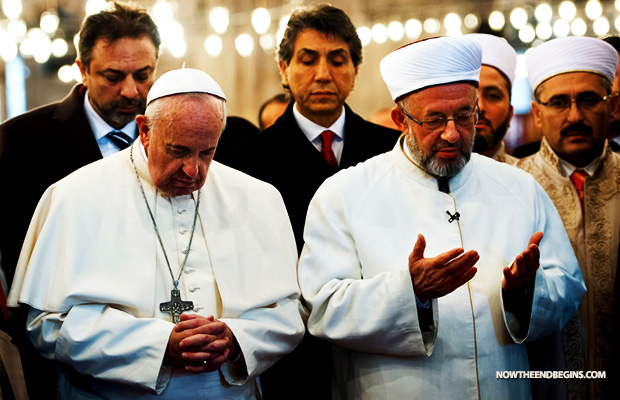 His head bowed, eyes closed and hands clasped in front of him, Francis prayed alongside the Grand Mufti of Istanbul, Rahmi Yaran, in the 17th-century Sultan Ahmet mosque

Pope Francis is intent on bringing Islam into the fold of the Roman Catholic church under the banner of Chrislam, a united Christian-Muslim outreach. He has found a very receptive and willing audience with Muslims wherever he has gone to speak.

ISTANBUL — Pope Francis stood Saturday for two minutes of silent prayer facing east in one of Turkey‘s most important mosques, a powerful vision of Christian-Muslim understanding at a time when neighboring countries are experiencing violent Islamic assault on Christians and religious minorities.

Francis nodded, smiled and looked up in awe as Yaran gave him a tour of the Blue Mosque, famed for its elaborate blue tiles and cascading domes. Presenting the pope with a blue, tulip-designed tile, Yaran said he prayed to God that his visit would “contribute to the world getting along well and living in peace.”

His head bowed, eyes closed and hands clasped in front of him, Francis prayed alongside the Grand Mufti of Istanbul, Rahmi Yaran, in the 17th-century Sultan Ahmet mosque, shifting gears to religious concerns on the second day of his three-day visit to Turkey.

“May God accept it,” Yaran told the pope of their prayer.

The Vatican spokesman, Rev. Federico Lombardi called it a moment of “silent adoration.” Lombardi said Francis told the mufti twice that Christians and Muslims must “adore” God and not just praise and glorify him.

Read the rest of this story on Yahoo News…