"It is the first collaboration of the Vatican with an Arab country," not only because it presents excellent artworks but also because it furthers dialogue between Christians and Muslims.... 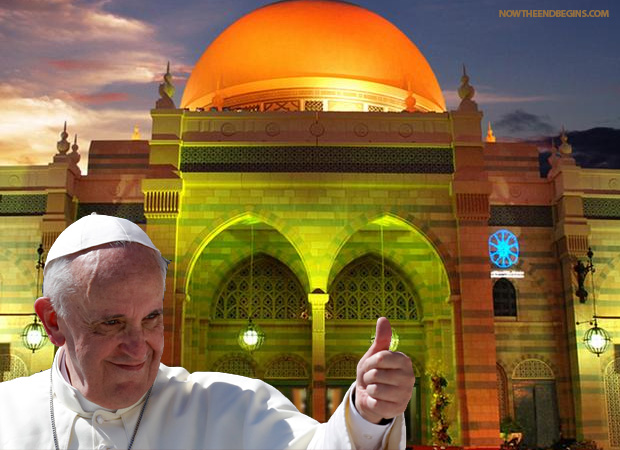 Pope Francis can best be described as a man on a mission. That mission seems to be the unification of the Vatican’s Roman Catholic system with Islam. This demonic hybrid is what is more commonly known as Chrislam. Francis is building on the already impressive body of work in this field started by apostate Emergent Church preacher Rick Warren.

German website DW reports that for the first time ever, the Vatican is staging an unusual exhibition in the Emirate of Shajah. The show is seen as a sign of openness and cooperation between religions.

“It is the first collaboration of the Vatican with an Arab country,” said al-Khamis. Indeed, the exhibition is one-of-a-kind – not only because it presents excellent artworks but also because it furthers dialogue between Christians and Muslims.

CLICK IMAGE FOR CHRISLAM UPDATES FROM AROUND THE WORLD

The fact that Rome is lending its works for the first time is an act of diplomacy in line with Pope Francis’s current policies. While Pope Benedict XVI had distanced himself from other religions, his successor is pursuing a different policy. In October last year, during a speech for the sponsors of the Ethnological Museum, Pope Francis pointed out the unifying role of culture in religious, social and moral matters.

In the exhibition catalog, the Vatican writes that it will treat the Islamic objects “with the same amount of respect as the Leonardos, Raffaels and Michaelangelos.” Fittingly, the title of the exhibition is “So that you may know each other.” which is actually a verse from the Koran in response to the question of why people are so different. Mutual understanding between Christians and Muslims is exactly what the exhibition aims at.