Pope Francis called on Sunday on every European parish and religious community to take in one migrant family each in a gesture of solidarity he said would start in... 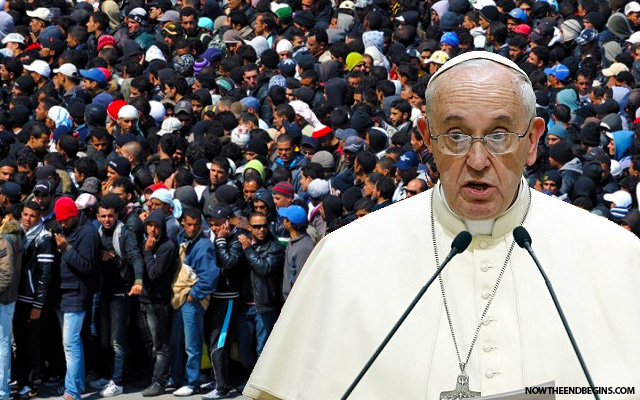 “I don’t think you can overstate the importance that the rise of Islamic fundamentalism will have to the rest of the world in the century ahead-especially if, as seems possible, its most fanatical elements get their hands on nuclear and chemical weapons and the means to deliver them against their enemies.”  – Ronald Reagan

Right now, the European Union states are being besieged by a virtual sea of immigrants seeking asylum in their counties. The vast majority of these people are undocumented Muslims with terror ties to Al Qaeda and ISIS. This type of jihad is known as biological jihad and it is highly successful in changing the makeup of a non-Muslim country into a Muslim majority country. And who is demanding that all of Europe blindly take in these tens of thousands of undocumented Muslim immigrants with ISIS terror ties? Why, it’s our old friend Pope Francis, the False Prophet. What a shock.

The Huffington Post reports today that Pope Francis said “I appeal to the parishes, the religious communities, the monasteries and sanctuaries of all Europe to … take in one family of refugees,” after his Sunday address in the Vatican.

The pope’s call goes out to tens of thousands of Catholic parishes in Europe as the number of refugees arriving over land through the Balkans and across the Mediterranean to Italy and Greece hits record levels.

But Muslim expert and author Robert Spencer wrote Sept. 4 in Front Page Magazine, “This is no longer just a ‘refugee crisis.’ This is a hijrah.”

“To emigrate in the cause of Allah – that is, to move to a new land in order to bring Islam there, is considered in Islam to be a highly meritorious act,” Spencer wrote. He cited the following Quranic text:

“And whoever emigrates for the cause of Allah will find on the earth many locations and abundance,” says the Quran. “And whoever leaves his home as an emigrant to Allah and His Messenger and then death overtakes him, his reward has already become incumbent upon Allah. And Allah is ever Forgiving and Merciful” Quran 4:100

And now, looking at Europe and America, a migration invasion of a much greater magnitude is underway.

Evidence of that invasion came in February when an ISIS operative confirmed what many already suspected – the Islamic State is using the refugee crisis to form a fifth column of Muslim fighters inside Western nations.

The Syrian operative claimed more than 4,000 trained ISIS gunmen have already been smuggled into Europe – hidden among innocent refugees, reported the Express, a British newspaper.

Hungary’s prime minister, Victor Orban, was lampooned in the European media Thursday for writing an op-ed in which he stated Hungary was blocking the Muslim migrants to preserve its Christian heritage. But more European leaders should be as astute as Orban, says Clare Lopez, a senior Middle East analyst for the Center for Security Policy.

“Today, it is the nation-state system and any concept of national sovereignty that is under concerted attack by the forces of the global jihad movement,” Lopez told WND. “Jihad is not only a violent phenomenon but can be pursued by many other means, including hijra.”

The ISIS smuggler, in his 30s with a neatly trimmed black beard, revealed to BuzzFeed that the ongoing clandestine operation has been a “complete success.”

“Just wait,” he smiled. “It’s our dream that there should be a caliphate not only in Syria but in all the world and we will have it soon, God willing.” “They are going like refugees,” he explained. “Others just go to Europe to be ready.”