Pope Francis urged members of all religions and those belonging to no church on Wednesday to unite... 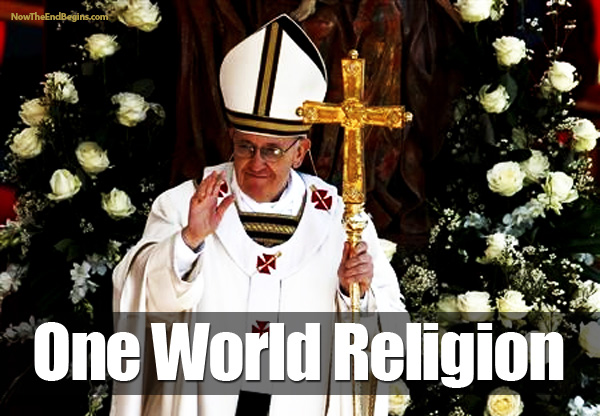 Yahya Pallavicini, a leader of Italy's Muslim community, said he was impressed by the pope's insistence of inter-religious friendship.
by Geoffrey Grider March 21, 2013
NOW THE END BEGINS SHARE:

“And I beheld another beast coming up out of the earth; and he had two horns like a lamb, and he spake as a dragon. And he exerciseth all the power of the first beast before him, and causeth the earth and them which dwell therein to worship the first beast, whose deadly wound was healed.” Revelation 13:11,12

VATICAN CITY (Reuters) – Pope Francis urged members of all religions and those belonging to no church on Wednesday to unite to defend justice, peace and the environment and not allow the value of a person to be reduced to “what he produces and what he consumes”.

Yahya Pallavicini, a leader of Italy’s Muslim community, said he was impressed by the pope’s insistence of inter-religious friendship.

Francis, elected a week ago as the first non-European pope in 1,300 years, met leaders of non-Catholic Christian religions such as Orthodox, Anglicans, Lutherans and Methodists, and others including Jews, Muslims, Buddhists and Hindus.

“The Catholic Church is aware of the importance of furthering respect of friendship between men and women of different religious traditions,” the Argentine pontiff told the religious leaders in an audience at the Vatican.

Speaking in Italian in the frescoed Sala Clementina, he said members of all religions and even non-believers had to recognize their joint responsibility “to our world, to all of creation, which we have to love and protect.

“We must do much for the good of the poorest, the weak, and those who are suffering, to favor justice, promote reconciliation and build peace,” he said.

Francis told the religious leaders to fight “a one-dimensional vision of a human person, according to which man is reduced to what he produces and what he consumes,” which he said was “one of the most dangerous snares of our times”.

While he said history had shown that any attempt to eliminate God had produced “much violence,” he reached out to those who seek truth, goodness and beauty without belonging to any religion.

“They are our precious allies in the commitment to defend human dignity, build a more peaceful coexistence among people and protect nature with care,” he said. source – Yahoo News