At their meeting today in Rome, they discussed among other things, the coming alliance of the Roman Catholic church with the Charismatic apostates. ... 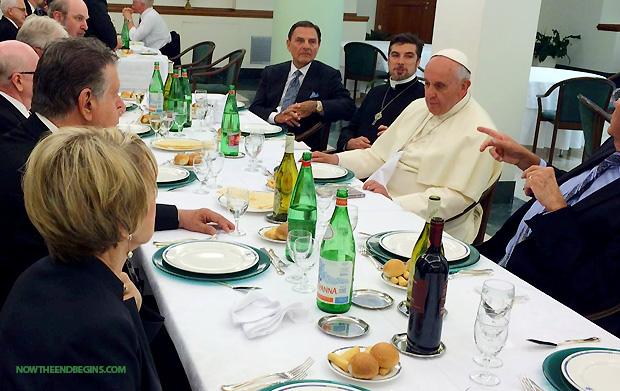 The apostate Charismatics will be the first to fall

Back in March, we reported to you how Anglican priest Tony Palmer, a member of the Roman Catholic Ecumenical Delegation for Christian Unity and Reconciliation, gave a rousing call to Kenneth Copeland’s church to “return to Mother Rome”. He was met with a hero’s welcome by a very enthusiastic congregation. And just in case you thought that it was a “one off” meeting, you would be sadly mistaken.

Flash forward to today in Vatican City, Rome, and who do we see meeting around the table?  Why, it looks like charismatic leader Kenneth Copeland, Roman Catholic priest Tony Palmer, and assorted others from the Charismatic movement in Toronto breaking bread with the False Prophet from the book of Revelation, Pope Francis. And just in case you forgot Tony Palmer’s original message, here is a refresher for you:

At their  meeting today in Rome, they discussed among other things, the coming alliance of the Roman Catholic church with the Charismatic apostates. This has already been in the works for quite some time, and they feel very confident of making the merger. Of course, at first, it will simply be  a “let’s focus on what we have in common” ruse whose mask will be dropped soon after the Charismatics have grown comfortable with the idea.

Absorbing the Charismatics and the Pentecostal movements will create the foundation the Vatican needs for their One World Religion. The Vatican’s alliance with Islam has already been established to great success. Just like Rome used the army of Spain as muscle for the Spanish Inquisition during the dark ages, Rome will use the blood-thirsty Muslim terrorists of Islam to regain control in our day. Joel Osteen has already met with Pope Francis, and is a huge supporter of his efforts.

The Roman Catholic Church brags constantly that they have “never changed”, and that is true. The Vatican that exists today is exactly the same demonic system that began the Spanish Inquisition to kill Christians back then. As Ecclesiastes says, that which has already been, is the thing that shall be.

Even so, come Lord Jesus…quickly.