Is Pope Francis Intentionally Working To Create A Church Split?

Any doubt that times are changing ended with last month's Vatican synod, or church council, which brought hundreds of bishops and other Catholics to Rome for two weeks to... 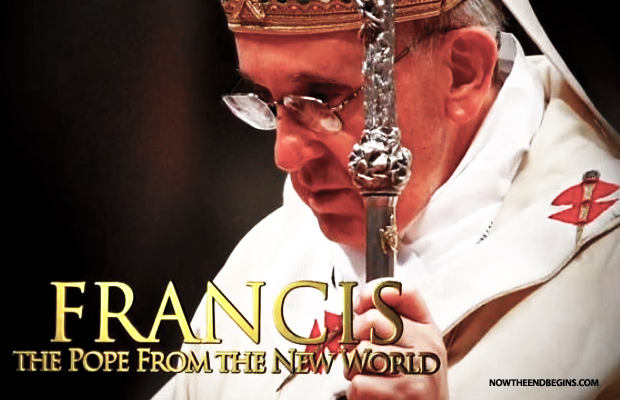 The Times They Are A’Changing

“So he carried me away in the spirit into the wilderness: and I saw a woman sit upon a scarlet coloured beast, full of names of blasphemy, having seven heads and ten horns. And the woman was arrayed in purple and scarlet colour, and decked with gold and precious stones and pearls, having a golden cup in her hand full of abominations and filthiness of her fornication: And upon her forehead was a name written, MYSTERY, BABYLON THE GREAT, THE MOTHER OF HARLOTS AND ABOMINATIONS OF THE EARTH.” Revelation 17:3-5

It has only been a little more than a year and a half since Pope Francis assumed the the papal throne in Rome, but what an incredible time of change and upheaval it has brought to the Catholic faith. More than any other pope in recent memory, Francis seems to be a man on a mission. And that mission, for better or for worse, is changing the Catholic church and faith in myriad ways.

The most startling of these changes occurred last month at the Synod where Pope Francis floated the trial balloon of welcoming openly-homosexual LGBT members into the church, resulting in a news media firestorm will forced the Vatican to issue a series of hastily-written denials.

The bible clearly says that the One World Church, as mentioned in Revelation 17 & 18, will be the Roman Catholic system which is described there in stunningly-accurate prophetical detail. But in order for the Vatican to fulfill their role, momentous change needs to take place. Under the leadership of Pope Francis, things are indeed changing rapidly.

A senior American cardinal in the Vatican says that under this pope, the Roman Catholic Church is “a ship without a rudder” and the faithful “are feeling a bit seasick.” Philadelphia Archbishop Charles Chaput complains that a recent Vatican conference called by Pope Francis produced “confusion,” adding, “Confusion is of the devil.”

A group of conservative lay Catholics say they felt “betrayed” by a preliminary report from the conference that proposed a more welcoming attitude toward gay men and lesbians.

Turnabout is supposed to be fair play, but for these and other U.S. Catholic conservatives and traditionalists, the papacy of Francis also seems to be infuriating, worrying or just plain puzzling.

Many conservatives struggle to get a handle on Pope Francis, who since taking office last year warned against an “obsessive” concern with culture war issues, such as abortion and gay marriage; encouraged discussion of church teaching on things like contraception and divorce; and asked, regarding gay men and lesbians who profess religious faith, “Who am I to judge?”

America’s 78 million baptized Catholics form the nation’s largest religious denomination. Some yearn for a simpler time — like 2012. “When the pope says, ‘Don’t judge,’ I don’t agree with that,” says Mick O’Connell, a 68-year-old Catholic from Philadelphia standing outside St. Patrick’s Cathedral in New York City. “It’s his job to judge right from wrong.”

Any doubt that times are changing ended with last month’s Vatican synod, or church council, which brought hundreds of bishops and other Catholics to Rome for two weeks to discuss the application of church teaching on marriage and family life.

After the pope announced plans for the conference last year, the Vatican took the unprecedented step of sending questionnaires to local dioceses seeking grass-roots opinion on matters such as same-sex marriage, contraception, cohabitation and divorce.

Liberals cheered a preliminary report on the proceedings that, consonant with Francis’ inclinations, expressed welcome to gay men and lesbians of faith and hope for gentler treatment of Catholics who live together outside of marriage or have divorced and remarried outside the church (and thus cannot receive Communion).

Conservatives then rallied and struck much of what they found offensive in the first report from the synod’s final one — a move widely reported as a rebuff of Francis. But the damage was done.