The three-week Vatican gathering, known as a synod, has erupted into a theological slugfest over Pope Francis vision for a more inclusive church, displaying the most bitter and public...

“And call no man your father upon the earth: for one is your Father, which is in heaven.” Matthew 23:9  (KJV)

EDITOR’S NOTE: The Vatican has long said that the Catholic Church “never changes”, but guess what? It is in the death throes of a cataclysmic change at this very moment. Just as Obama made homosexuality and the LGBT Agenda an evil ordinance of the United States, so Pope Francis is attempting to wreak that same unGodly havoc upon the already Godless Catholic church corporation. The ensuing war is splitting the Catholic church right down the middle. Mark it down, there will be blood.

VATICAN CITY — At one point during a major summit of the Roman Catholic hierarchy that ends this weekend, a senior conservative bishop took the floor inside the Vatican’s assembly hall and promptly charged his liberal peers with doing the devil’s work.

The three-week gathering, known as a synod, has erupted into a theological slugfest over Pope Francis’s vision for a more inclusive church, displaying the most bitter and public infighting since the heady days of Catholic reform in the 1960s.

Click to visit the NTEB Pope Francis Archives for more on what the unholy, childless “father” has been up to.

Archbishop Tomash Peta of Kazakhstan captured the intensity of the divide, raising eyebrows — and even a few incredulous laughs — as he decried some of the policy changes being floated at the synod as having the scent of “infernal smoke.”

It was just another day at a synod that — more than any single event since Francis began his papacy in 2013 — has highlighted the extent his outreach to once-scorned Catholics has triggered a tug-of-war for the soul of the Catholic Church. More important, it underscored just how hard it may be for Francis to recast the church he serves in his image.

In fact, the pushback by traditionalists has been so strong at the synod that the chances of fast changes on hot-button family issues — including whether to offer communion to divorced and remarried Catholics and more welcoming language to homosexuals — have substantially dimmed, if not gone completely out.

As the synod races towards a close, there has been a last-ditch push to find common ground that could at least open the door to policy alterations. But some observers are already comparing Pope Francis to President Obama — a man whose reformist agenda was bogged down by a conservative Congress.

“Francis has the same problem that Obama had,” said the Rev. Thomas Reese, a senior analyst for the National Catholic Reporter. “He promised the world, but Congress wouldn’t let him deliver. If nothing much comes of this synod, I think people will give the pope a pass and blame the bishops for stopping change.”

For Francis, the synod — the Vatican’s second in 12 months on issues related to the family — sets up perhaps the most important decision of his papacy.

The 270 senior church officials from 122 countries are set to finish voting on a final document by Saturday. But Francis has the final say, holding the power to simply accept the synod’s recommendations, go beyond them, or withhold judgment to encourage further debate. All of those avenues, however, carry a measure of risk.

Using his powers to go beyond the synod’s recommendations could rouse the wrath of conservatives, some of whom are already openly questioning the trajectory of his papacy. Yet if the final recommendation of the synod falls short of liberal hopes, simply rubber stamping it, or encouraging more debate, could generate disappointment among Francis’s fans worldwide. They may begin to see him as a revolutionary in gestures and words, but not on substance. 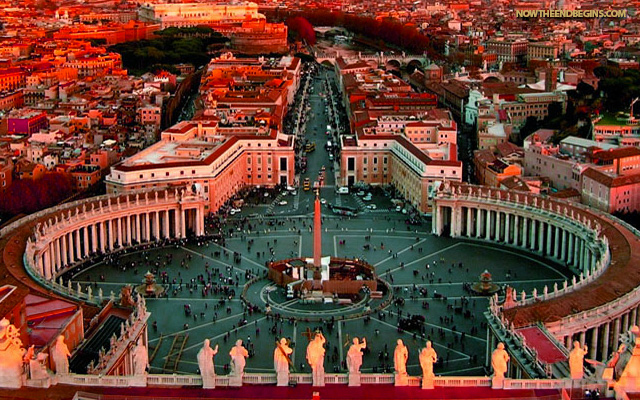 Want to know the truth about the origins of the Catholic church? Click here.

If he agrees fully with the synod’s recommendations, “there might be a collapse of his popularity in world public opinion, but there might also be an increase of his popularity among Catholics,” said Massimo Franco, author of The Crisis of the Vatican Empire and a columnist at the Italian daily Corriere della Sera.

Even by Vatican standards, the level of drama at the synod has been extraordinary.

As recently as Wednesday, the Vatican strenuously denied a report in the Italian press that Francis had a small brain tumor. That came after the synod started off with a bang in early October, when another leak in the Italian press brought to light a letter to the pope signed by 13 conservative cardinals — including Cardinal Timothy Dolan of New York — that seemed to question the pope’s handling of the synod process.

Adding to the mystery, some of the 13 denied they had signed the letter. Some Vatican watchers saw Francis’s recent warning to the synod not to be taken in by conspiracy theories as a thinly veiled reference to the missive. To some senior Vatican officials, the letter appears close to open sedition.

“The widespread opinion I perceived among the fathers has been a sense of disgust,” Bishop Marcello Semeraro, one of the senior clerics who will draft the final synod document, told the Vatican Insider web site.

Yet by telling bishops that nothing is off the table for discussion, Francis has undoubtedly lifted the lid on what can be examined — including his management style. Conservatives bishops, however, see him as having also opened a Pandora’s box, allowing a free flow of ideas that have startled some traditionalists and provoked a sharp backlash.

Of the many issues under debate here, two have emerged as the most polemic.

One is whether to grant divorced and remarried Catholics — who are technically committing adultery in the church’s eyes — access to communion. In addition, there is the question of whether to offer a warmer welcome to gays and lesbians, including striking references to homosexuality as “intrinsically disordered” from church teachings.

The divide is not just liberal vs conservative, but also geographic with prelates in Africa, for instance, denouncing the “Eurocentric” and “Western” fixation with issues such as homosexuality. Guinean Cardinal Robert Sarah linked the push for gay rights to abortion and Islamic extremism, comparing them all to what “Nazi-Fascism and Communism were in the 20th century.”

The vehemence of the backlash has shocked even some moderate conservatives, suggesting the rise of a Tea Party-like faction of bishops within the hierarchy.

“Some of them are talking now like this is Armageddon,” Archbishop Mark Coleridge of Brisbane, Australia, said in an interview with The Washington Post.

“They see themselves as the sons of goodness and others as the sons of darkness and evil. I have been very surprised by this apocalyptic view of things at the synod . . . This isn’t the way discussions are done,” he added.

The sniping has gone surprisingly public — and personal. The powerful conservative Cardinal George Pell, for instance, suggested in an interview with Le Figaro that an epic “battle” was taking shape in the church between the conservative theology of Benedict XVI and the liberal German Cardinal Walter Kasper, who is seen as a Francis ally and the architect of some of the most progressive measures being fielded at the synod.

Pell’s comment provoked a rare public rebuke this week from the German Cardinal Reinhard Marx, who called out Pell by name at a Vatican press conference.

“In the synod, we are not in a battle. We are not Ratzinger vs. Kasper,” Marx said, using Pope Benedict’s birth surname.“That is not okay.”

The plot thickened further on Thursday as an article appeared on a conservative Catholic Web site claiming to be from “ a very wise, knowledgeable and highly influential cleric” and entitled “The Failed Francis Pontificate.”

In it, the author writing under the pen name Don Pio Pace and using insider terminology, argues that the divided church is now “intrinsically ungovernable” and decried this “strange synod” for being overwhelming focused on “adulterous couples and homosexual couples.”

Some have also denounced the general sense of chauvinism hanging over the debates in which only male clerics have voting rights.

Maureen Kelleher, an American nun serving in one of the non-voting roles at synod, told the National Catholic Reporter that there were “times that I have felt the condescension so heavy, you could cut it with a knife.”

Speaking of women in general, she added: “I see a high level of non-acceptance of us as holding up half the sky.” source