“Every year hundreds of billions of dollars, which should be paid in taxes to fund health care and education, accumulate in tax haven accounts,” Pope Francis told participants in a Vatican seminar, “thus impeding the possibility of the dignified and sustained development of all social agents.” “Today’s structures of sin include repeated tax cuts for the richest people, often justified in the name of investment and development,” Francis told the meeting organized by the Pontifical Academy for Social Sciences. During his discourse, the pope repeated his conviction that poverty is on the rise worldwide and “the poor increase around us.”

Communists and Socialists are always concerned about other people’s money, and getting their hands on it is their all-consuming thought. Pope Francis, good Communist that he and all popes are, is no different. This is why you see him popping up constantly at meetings with CEOs who control billion dollar corporations, currying favor and making sure he is close to the money. Did you know that the Vatican is the world’s wealthiest company?

“And it came to pass in those days, that there went out a decree from Caesar Augustus, that all the world should be taxed. (And this taxing was first made when Cyrenius was governor of Syria.) And all went to be taxed, every one into his own city.” Luke 2:1-3 (KJB)

We have told you many times that the first time Jesus came, it was under Roman occupation at a time of global taxation. At His Second Coming, 7 years after the Pretribulation Rapture of the Church takes place, Rome will again be in power and there will be global taxation. This is why you are now seeing Pope Francis gathering his children together to form the end times One World Religion of Chrislam, and why he endlessly talks about wealth redistribution and global taxation.

Here’s a simple question no one ever seems to ask. Since the Vatican vaults contain a disproportionate amount of the world’s great art and literary treasures valued in the billions of dollars, how come no one ever asks Pope Francis why they don’t sell some of them and give it to the poor? If they did that they would have endless financial resources with which to help the poor out of poverty, but they don’t do it. Yeah, someone should ask the pope that sometime.

FROM BREITBART NEWS: “Every year hundreds of billions of dollars, which should be paid in taxes to fund health care and education, accumulate in tax haven accounts,” Pope Francis told participants in a Vatican seminar, “thus impeding the possibility of the dignified and sustained development of all social agents.” 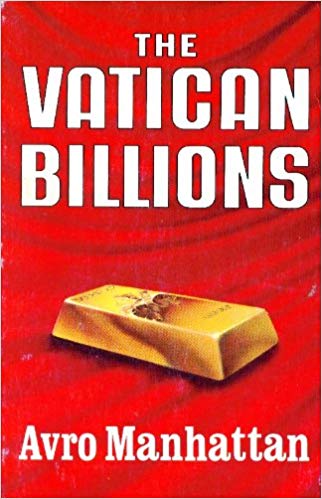 “Today’s structures of sin include repeated tax cuts for the richest people, often justified in the name of investment and development,” Francis told the meeting organized by the Pontifical Academy for Social Sciences.

During his discourse, the pope repeated his conviction that poverty is on the rise worldwide and “the poor increase around us.”

With the passage of time and the advances of civilization the number of poor people increases rather than diminishing, Francis similarly asserted last June, and “the poor are always poorer, and today they are poorer than ever.”

As a Brookings Institution report noted in late 2018, however, the world is currently experiencing “the lowest prevalence of extreme poverty ever recorded in human history — less than 8 percent,” and that number falls with each passing year.

According to the widely used “international poverty line,” people are considered to be in “extreme poverty” if they live on less than $1.90 per day or its equivalent.

It is not only “extreme poverty” that is falling, however. The global poverty rate has been falling across every single poverty line, whether the bar is set at $1.90 a day or $10 a day. In his address Wednesday, the pope lamented that the per capita annual income in the world this year will be $12,000 “according to official reports.”

This does not suggest that poverty is not a problem or that poverty reduction is not a worthy and important goal. It does mean, however, that global poverty is not increasing but is decreasing rapidly. In free market economies that favor wealth creation such as the United States, “extreme poverty” has virtually been eradicated.

“If extreme poverty exists in the midst of wealth (also extreme) it is because we have allowed the gap to widen to become the largest in history,” the pope said. “The world’s 50 richest people have $2.2 trillion worth of assets. These fifty people alone could fund the health care and education of every poor child in the world, whether through taxes, philanthropic initiatives, or both.”

It must be acknowledged, however, that no such “gap” exists between the wealthy and the poor, since the vast majority of people live somewhere in the middle. There is not a cluster of ridiculously rich people followed by an immense mass of very poor people. The majority of people are neither very rich nor very poor. READ MORE