Pope Francis formally announced his intention to attend the World Meeting of Families – Philadelphia 2015, set to be held September 22-27, 2015... 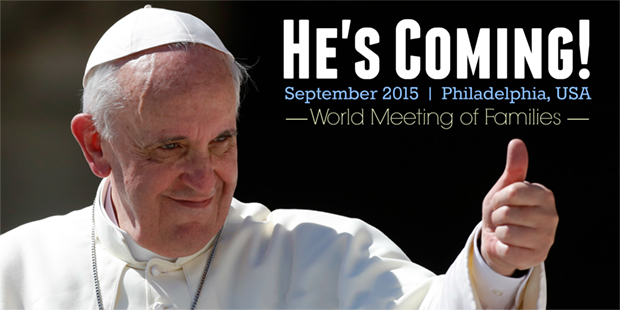 The Vatican confirms Pope Francis visit to Philadelphia next year

Pope Francis quest to unite professing Christianity with the Roman Catholic system continues unchecked with his announcement yesterday that he will come to America in 2015 to be the keynote speaker at the World Meeting of Families in Philadelphia. This week he is holding a global ecumenical conference featuring Muslim leaders, pagans, and Chrislam founder Rick Warren from Saddleback Church in California.

Building the One World Religion is hard work, but Francis is making more progress than any other pope before him.

Rome, Italy (November 17, 2014) – In remarks offered today in Rome, Pope Francis formally announced his intention to attend the World Meeting of Families – Philadelphia 2015, set to be held September 22-27, 2015. This visit will mark his first to the United States as pope. He will be only the fourth reigning Pontiff to visit our nation in its history.

“As I’ve said many times before, I believe that the presence of the Holy Father will bring all of us –Catholic and non-Catholic alike – together in tremendously powerful, unifying and healing ways. We look forward to Pope Francis’ arrival in Philadelphia next September and we will welcome him joyfully with open arms and prayerful hearts.”