Pope Francis, fresh off his spectacular launch of his political career with his speech before Congress yesterday, address the United Nations General Assembly in New York City.... 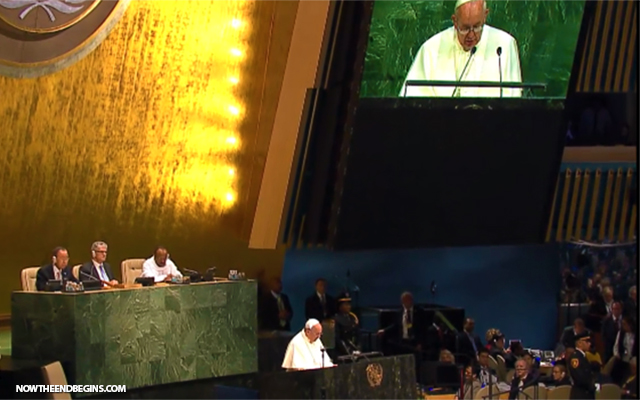 “And the angel said unto me, Wherefore didst thou marvel? I will tell thee the mystery of the woman, and of the beast that carrieth her, which hath the seven heads and ten horns.” Revelation 17:7 (KJV)

Pope Francis, fresh off his spectacular launch of his political career with his speech before Congress yesterday, addressed a packed house at the United Nations General Assembly in New York City. At barely 5:00 minutes into his speech, he had already repeated the same catch-phrase “oppressive lending systems” multiple times. Evidently, the head of the world’s richest corporation, the Vatican, does not seem to like capitalism for anyone else. As with yesterday’s stump speech, the Pope did not mention Jesus Christ at all, and only gave vague, generalized references to God. 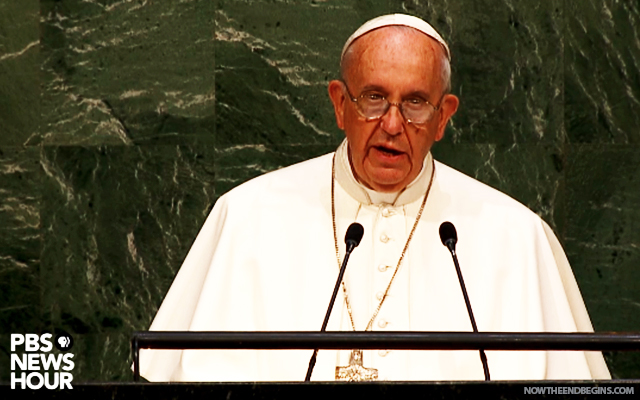 He warned of a “Pandora’s box” that would be opened and cause grave global harm, and that a “framework must be put in place” to prevent it. Taking all nuclear weapons is part of his “framework”.

Leaving that, the Pope went on to say that the environment was a “living entity” that must be afforded rights and privileges like as a human being would be. He stopped just short of invoking Mother Gaia, but he sure came close. He implied that “offenses against the environment” should be prosecuted in criminal courts. Pope Francis said that the “phenomenon of social and economic exclusion” must be brought to an end, without saying how that should be accomplished. But he then used the phrase “technical instruments of verification” in regards to policing environmental offenders, leading one to conclude he is speaking about a world court to judge and punish crimes against the planet. Certainly, this is where the globalists wish to bring the whole Climate Change debate.

Left Behind: The Movie – The Antichrist Addresses The United Nations

Nicolae Carpathia was also working for the “common brotherhood of man” and for the “common good of all civilization”.  Nicolae spoke of creating a “utopia without any weapons.” His words in this clip eerily echo the words spoken by Pope Francis today at the United Nations. We don’t think that Francis is the Antichrist, but we do think he is the False Prophet.

Pope Francis call for “complete prohibition” of all nuclear weapons

Francis used the phrase “new agenda” to talk about how his vision of how the New World Order would go. He warned of a “Pandora’s box” that would be opened and cause grave global harm, and that a “framework must be put in place” to prevent it. Specifically, Francis said that nuclear weapons represented an “affront” to the United Nations united by “fear and distrust”. There is an “urgent need” to work for a “complete prohibition of these weapons”. Hmm, this sure sounds a lot like what Nicolae Carpathia said in the “Left Behind” series when he addressed the United Nations. But I’m sure that’s just a coincidence, hmm…

“The hour has come”, Francis closed with, “that we must think about the hour of our common destiny. The real danger comes from man who has at his disposal ever more powerful instruments. The common hope of all man must continue to rise on the understanding of universal fraternity.”

Left out was any mention of Jesus Christ, creator of the world and everything in it, with whom we will all one day have to face either in glory or in judgment. Pope Francis is a New World Order globalist, working to create a phony “brotherhood of man” all working for the “common good”. This has been the battle cry of every Socialist, Communist and Marxist dictator in the last 120 years.

He ended with “I pray to almighty God” that everyone here in the United Nations would work for the “brotherhood of man” and work to “achieve the common good of all mankind. May God bless you all.”

Not one word of Scripture, not one verse from the Bible, nothing. That’s the “message of hope” that the “vicar of Christ” leaves you with. So let us remind you that this world is not held together by the “universal fraternity of man”, but rather by Jesus Christ Himself.

“Since we heard of your faith in Christ Jesus…For by him were all things created, that are in heaven, and that are in earth, visible and invisible, whether they be thrones, or dominions, or principalities, or powers: all things were created by him, and for him: And he is before all things, and by him all things consist.” Colossians 1:4,16,17 (KJV)