The Vatican has formally recognized the International Association of Exorcists, a group of 250 priests in 30 countries who liberate the faithful from demons. ... 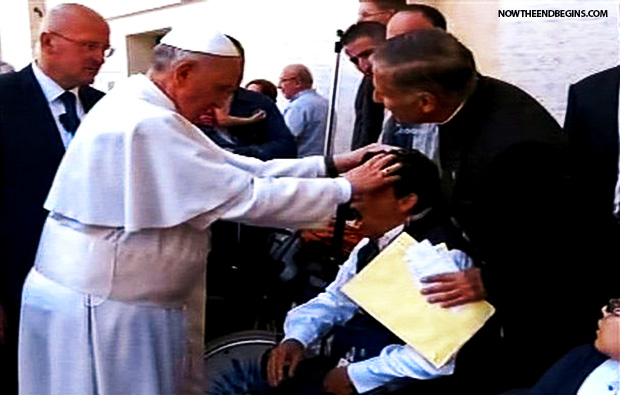 Laying the groundwork for the One World Religion

“And upon her forehead was a name written, MYSTERY, BABYLON THE GREAT, THE MOTHER OF HARLOTS AND ABOMINATIONS OF THE EARTH. And I saw the woman drunken with the blood of the saints, and with the blood of the martyrs of Jesus: and when I saw her, I wondered with great admiration.” Revelation 17

The New York Times today reports that demon-obsessed Pope Francis has gone into the exorcism business:

The Vatican has formally recognized the International Association of Exorcists, a group of 250 priests in 30 countries who liberate the faithful from demons. The Vatican newspaper L’Osservatore Romano reported Tuesday that the Vatican’s Congregation for Clergy had approved the organization’s statutes and recognized the group under canon law.

If you have been paying attention to what’s been happening since Francis became the Pope, then you know some very radical things are happening.

In this image made from video provided by APTN, Pope Francis lays his hands on the head of a young man on Sunday, May 19, 2013, after celebrating Mass in St. Peter’s Square. The young man heaved deeply a half-dozen times, convulsed and shook, and then slumped in his wheelchair as Francis prayed over him. The television station of the Italian bishops’ conference said it had surveyed exorcists, who agreed Francis either performed an exorcism or a prayer to free the man from the devil.” (AP Photo/APTN)

The Roman Pope has said that unbelievers go to heaven, aliens will be baptized, all religions must come back to Rome, and promoting Chrislam. As if all that wasn’t enough, Francis has just given the official Vatican stamp to a world-wide group of exorcists.

Pope Francis is obviously building something new as he pushes out the tent posts of the Roman Catholic system to include just about everyone and anyone. His new structure is what the bible calls the One World Religion of the False Prophet.

When you know that bible says that the False Prophet will deceive with “signs, miracles and wonders”, you immediately understand the Pope’s desire to be in the exorcism business.