“It’s not just Pope Francis, it’s the whole church throughout the world, and that is powerful,” said Monsignor John Ribat, president of the bishops’ conference of Oceania and archbishop... 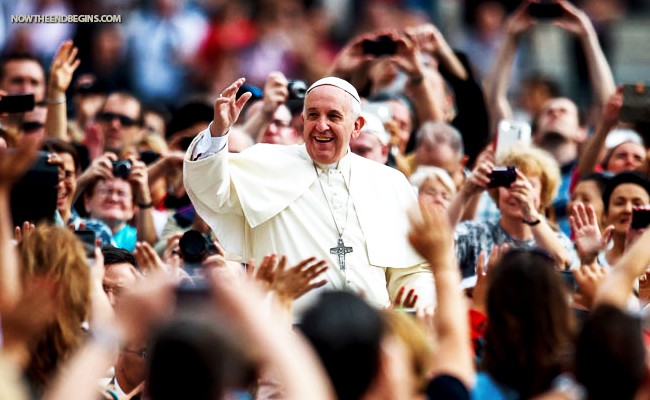 EDITOR’S NOTE: Under the leading of Pope Francis, the Vatican has set its sights on becoming a political power in this new century by throwing it’s complete weight behind the Climate Change scam. Many billions of dollars will exchange hands and fortunes will be won and lost. If they are successful in doing this, it will set the table for full-scale global political involvement by the Pope and the Vatican City. We just might have to upgrade Francis from being the False Prophet to the Antichrist. People have forgotten that the ultimate goal of the Vatican is world domination. They are the original Roman Empire, and right now, it seems to be reviving in accordance with Bible prophecy.

Is he the False Prophet, or the Antichrist?

Representatives of bishops’ conferences from around the globe signed the appeal in a renewed push to encourage climate negotiators meeting in Paris next month to heed Pope Francis’ call to protect God’s creation and the poor who suffer most from its exploitation.

The church’s 10-point proposal calls for governments to approve legally binding limits to global average temperatures, set a mid-century goal for phasing out emissions from fossil fuels and provide binding and ambitious mitigation commitments that recognize the different responsibilities for, and abilities to adapt to, global warming.

The goal should be “complete decarbonisation by mid-century, in order to protect frontline communities suffering from the impacts of climate change, such as those in the Pacific Islands and in coastal regions”.

In his landmark encyclical “Praise Be,” Francis denounced what he called the “structurally perverse” fossil fuel-based world economy that he says exploits the poor and destroys the Earth.

No precise temperature limit was proposed in the appeal. Indian Cardinal Oswald Gracias, who heads the Asian bishops’ conference, suggested the omission was a compromise designed to ensure all bishops could sign onto the appeal, which is the first of its kind for the episcopal conferences from each of the five continents.

“It’s not just Pope Francis, it’s the whole church throughout the world, and that is powerful,” said Monsignor John Ribat, president of the bishops’ conference of Oceania and archbishop of Port Moresby, Papua New Guinea, one of the front-line Pacific island nations most threatened by climate-induced rising sea levels.