Planned Parenthood Gets Support From The Satanic Temple Of Detroit

With the release of the Planned Parenthood videos, abortion sympathizers from the Satanic Temple of Detroit have decided to lend a hand of support for the baby killers.... 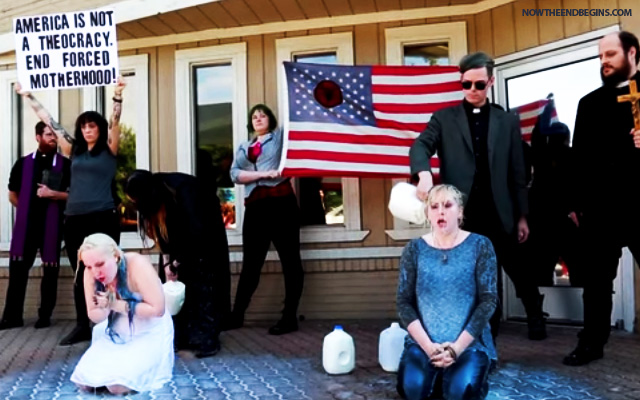 With the release of the Planned Parenthood videos, abortion sympathizers are upping their Satanic game. At a Chicago Planned Parenthood protest, speakers apparently located inside the clinic broadcast “horror music” at pro-life advocates in an effort to drown them out. That seems civil compared to the Satanic Temple of Detroit’s latest antics, in which Satanists poured milk all over women, allegedly simulating the oppression of breast milk and motherhood. The video is bizarre, with women acting like they’re choking in front of praying Christian protestors:

The Satanists adhere to such edifying statements of principle as “Satan represents indulgence instead of abstinence!” and “Satan represents all of the so-called sins, as they all lead to physical, mental, or emotional gratification!” They also declare that man is “just another animal.” It’s hard to imagine a more appropriate set of doctrines for the rutting life of the sexual revolution, where restraint is evil, physical experience is king, and people are simply sentient mammals trying to get the best out of life. A baby is thus no more sacred — and often less — than any other animal. Just ask Cecil the Lion.

While the vast, vast majority of abortion-rights supporters don’t identify with Satanists and would recoil from comparison with the Church of Satan, prominent Satanist involvement in the abortion debate does have a clarifying effect. A person who is willing to kill another person for the sake of preserving their own prosperity or emotional health is declaring that their life is supreme — their existence is at the center of all things. This is the core of Satanist theology. So when Satanists declare their creeds, they strike uncomfortably close to the rotten core of the abortion-rights regime. Moreover, the secular Left truly has been radicalized outside the American mainstream if it’s willing to gleefully identify with the worshipers of Baphomet.

It’s all fun and games until the public starts to identify a movement by its more prominent public supporters, of course. For years abortion-rights advocates have delighted in blasphemy, doing their dead-level best to shock sidewalk counselors, nuns, priests, and other pro-life advocates. For years their horrible behavior has largely been hidden from public view, as the media shamelessly covers for their obscenity. source