The Minerva Research Initiative, funded by the Pentagon to study the effects of when the people finally revolt, is the next step in the Illuminati plan for the future... 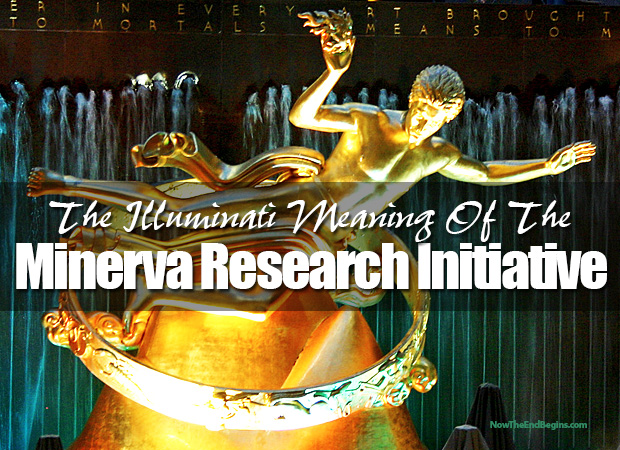 The famous statue of Prometheus outside the Rockefeller Plaza in New York City. Both Prometheus and his divine helper Minerva are revered by the Order of the Illuminati. The Rockefellers could not be making their secret society allegiance more obvious. Like their masters they too are adept at symbolic communication. The fountain over which the figure of Prometheus stands is significant because Minerva was associated with the healing power of water.
by Geoffrey Grider June 13, 2014
NOW THE END BEGINS SHARE:

What is the Minerva Research Initiative?

The Guardian UK today is reporting that the Pentagon, under the authority of Commander-in-chief Barack Obama, has been bankrolling detailed studies from various universities to learn how the military might best respond to a civilian uprising.

It’s called the “Minerva Research Initiative,” and its a US Department of Defense (DoD) research programme that is funding universities to model the dynamics, risks and tipping points for large-scale civil unrest across the world, under the supervision of various US military agencies. The multi-million dollar program is designed to develop immediate and long-term “warfighter-relevant insights” for senior officials and decision makers in “the defense policy community,” and to inform policy implemented by “combatant commands.”” The Guardian reported.

The famous statue of Prometheus outside the Rockefeller Plaza in New York City. Both Prometheus and his divine helper Minerva are revered by the Order of the Illuminati. The Rockefellers could not be making their secret society allegiance more obvious. Like their masters they too are adept at symbolic communication. The fountain over which the figure of Prometheus stands is significant because Minerva was associated with the healing power of water.

Among the projects awarded for the period 2014-2017 is a Cornell University-led study managed by the US Air Force Office of Scientific Research which aims to develop an empirical model “of the dynamics of social movement mobilization and contagions.” The project will determine “the critical mass (tipping point)” of social contagions by studying their “digital traces” in the cases of “the 2011 Egyptian revolution, the 2011 Russian Duma elections, the 2012 Nigerian fuel subsidy crisis and the 2013 Gazi park protests in Turkey.”Twitter posts and conversations will be examined “to identify individuals mobilized in a social contagion and when they become mobilized.”

Now here is where it gets really interesting

In short, Obama has ordered the Pentagon to spend millions to study how best to prepare for a mass civilian uprising within its own borders. It stands to reason that the information gleaned from such a study could just as easily be applied to rolling out a mass military-governmental takeover of same said citizenry. Obama is very  much like Hitler in that he is so sure of his success that he doesn’t really bother to cover his tracks.

As the old television commercials said, “but wait, there’s more!”

Out of the millions of people that will have read this story about the Minerva Research Initiative, how many hard core bloggers do you think looked up what the term “Minerva” refers to and why the Pentagon would choose that name for their report? Very few I am guessing, as of this writing NTEB seems to be the only one.  Minerva was a Roman goddess connected to intelligence and warfare.  She has a strong connection to Prometheus, whom she helped to steal fire from the gods of Olympus so that men could rise to the levels of gods. It is for this very reason the the Illuminati secret society calls their initiates of the 2nd level of the Illuminati Degree System the “Minerval” stage. 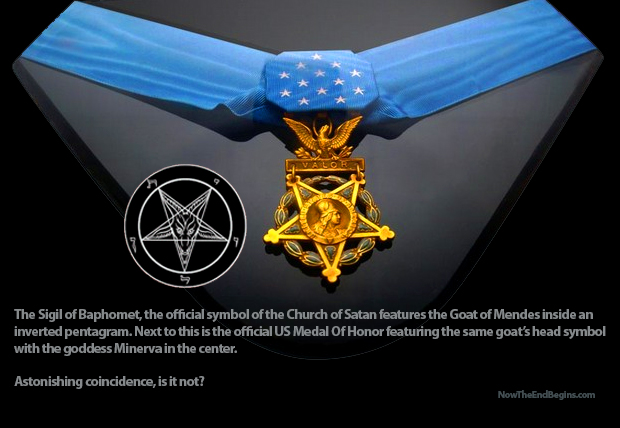 Out of all the times you have watched some brave warrior decorated with the United States Medal Of Honor, did you ever stop to look at what was on that medal? Maybe you should.

Since we are talking about the Pentagon, that 5-sided Federal building, have you ever stopped to consider the bizarre occult symbols on the US Medal of Honor? Because if you did, you would have see that it is the inverted Satanic Baphomet Goat’s Head, with our friend Minerva smack dab in the center. On the top in the blue ribbon you see the 13 stars representing the 13 levels of Illuminati wisdom.

Why did George Washington give a fervent warning to America about an Illuminati infiltration? Click image to find out what he said.

Maybe you’ve never wondered why Satanic and Illuminati symbolism appear at every level of the our government, our currency, and our founding documents, but perhaps it’s time that you did. The Minerva Research Initiative, funded by the Pentagon to study the effects of when the people finally revolt, is the next step in the Illuminati plan for the future of America.

They are broadcasting their plans, right in the Illuminati-themed title of the research study, for the next phase of what will become life in America: Armed Occupation.