A Palestinian from the occupied West Bank commandeered a taxi in the Israeli city of Tel Aviv before dawn on Monday, stabbing the driver and then injuring seven others,... 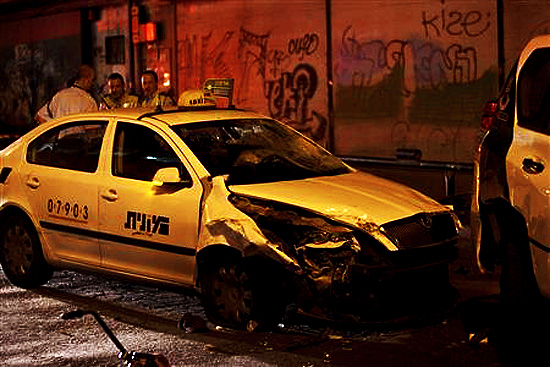 (Reuters) – A Palestinian from the occupied West Bank commandeered a taxi in the Israeli city of Tel Aviv before dawn on Monday, stabbing the driver and then injuring seven others, including police officers, after crashing into a roadblock, a police spokeswoman said.

Police suspect the perpetrator, who was in his 20s and arrested at the scene where he was also injured, “carried out an assault for nationalist motives,” spokeswoman Luba Samri said.

She said the suspect was from the West Bank city of Nablus, and that he shouted “Allahu Akbar” (God is greatest) when he struggled with police as they arrested him.

The incident occurred near a nightclub in the Israeli commercial capital where criminal incidents are frequent, but where police have also been on the alert for possible attacks inside Israel after heightened tension along Israel’s borders with Gaza and Egypt in the past 10 days.

The assailant “stole a taxi cab and drove it to the nightclub with the express intent of carrying out an attack,” she said. He stabbed and injured the driver, then crashed into a police roadblock outside the club, and got out of the cab and stabbed officers and civilians, she added.

One of the eight people hurt was listed in a serious condition in hospital and the others suffered light to moderate injuries, Samri said.

The suspect was also injured while resisting arrest, although the type of wound he sustained, whether a gunshot or blows, was not immediately clear.

None of the Palestinian militant groups issued any immediate claim of responsibility for the incident.

Attacks by Palestinian militants in Israeli cities were common during an uprising that erupted in 2000 when peace talks failed, lasting roughly through 2006, but have been rare in the years since.

Some Israeli officials have expressed fears there could be renewed violence not only because of tensions with Gaza, but also ahead of a plan by Palestinian President Mahmoud Abbas to seek U.N. recognition as a non-member state when the General Assembly convenes next month.

Israel objects to the Palestinian bid, calling it a unilateral step that bypasses peace negotiations, which froze a year ago in a dispute over Jewish settlements built on land Palestinians want for a state.

The violence related to the Gaza-Egypt border area has killed more than 40 on all sides — Israelis, Palestinians and Egyptians — since an August 18 gun attack that killed eight Israelis then sparked a series of clashes and assaults. source – Reuters