Palestine To Ask UN For Statehood Recognition Next Week

The Palestinians will ask the United Nations to upgrade their status in the world body by year's end, enabling them to pursue Israel through the international courts, a senior... 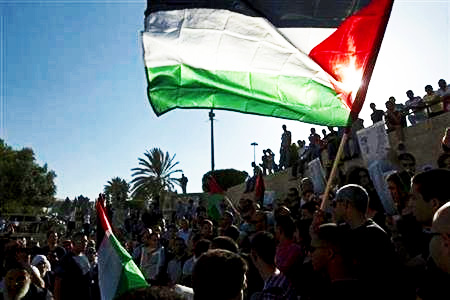 JERICHO, West Bank (Reuters) – The Palestinians will ask the United Nations to upgrade their status in the world body by year’s end, enabling them to pursue Israel through the international courts, a senior Palestinian official said on Thursday. 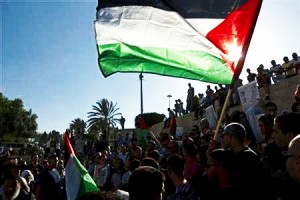 Palestinians hold flags during a Nakba rally in front of Damascus Gate in Jerusalem’s Old City May 15, 2012. REUTERS/Ronen Zvulun

The request to become a non-member “observer state” rather than just an “observer entity”, would give the Palestinians the same U.N. rank as the Vatican, enhancing their legal rights at a time when peace negotiations with Israel have hit a wall.

Such a motion would only need majority backing in the 193-nation U.N. General Assembly, where the Palestinians can rely on substantial support and resolutions cannot be vetoed by Israel’s most powerful ally, the United States.

“The day after (we get) non-member statehood, life will not be the same,” said the veteran Palestinian negotiator Saeb Erekat, speaking in his office in the West Bank city of Jericho.

Palestinian President Mahmoud Abbas sought full statehood recognition at the United Nations last year. This ambitious drive had to pass through the U.N. Security Council, but failed to gather enough votes in the face of fierce U.S. lobbying.

Abbas will address the General Assembly on September 27, after which his aides will consult other nations before presenting the watered-down request to become an observer state, claiming as Palestinian territory the lands that Israel seized in the 1967 war, with East Jerusalem as their capital.

Israel has annexed East Jerusalem and built 120 settlements across the occupied West Bank, with some 500,000 Israelis living beyond the so-called 1967 green line, originally an armistice line rather than the legal boundaries of a Palestinian state.

“After the U.N. vote … Palestine will become a country under occupation. Israel will not be able to say that this is a disputed area,” Erekat said. “The terms of reference for any negotiations will be about withdrawal, not over what the Israelis say is legal or not legal.”

Israel says Palestinians can gain independence only through direct negotiations, and has lobbied hard behind the scenes against their latest U.N. gambit, fearful of the consequences. Face-to-face talks brokered by the United States collapsed in 2010 over the issue of continued settlement building.

As an observer state, Palestine could not only participate in assembly debates, but also join various U.N. agencies, such as the Law of the Sea Treaty and the International Criminal Court (ICC), which is based in the Hague.

The ICC rejected in April a Palestinian request to look into alleged crimes in the Palestinian Territories, because they were not full U.N. members. Erekat indicated that Palestinians would turn again to the ICC after the forthcoming assembly vote.

“Those who don’t want to appear before the international tribunals must stop their crimes and it is time for them to become accountable,” he said.

Israeli Prime Minister Benjamin Netanyahu has indicated in private he fears Palestinians might accuse his government of violating the Geneva Conventions’ prohibition on forced displacement of populations by establishing settlements.

Looking to dissuade Abbas and head off a U.N. showdown, Israel has threatened to withhold tax revenues that are vital to the well-being of the cash-strapped Palestinian Authority.

The United States might also impose financial penalties, while some European nations are urging Palestinian caution.

“We have invested heavily in the Palestinian Authority and we do not want to see that investment jeopardised,” said a European Union diplomat, suggesting that a number of European states might vote against the Palestinian U.N. resolution.

Some 120 countries have already granted the Palestinians the rank of a sovereign state, but Erekat said they hoped to win the votes of between 150 and 170 nations at the United Nations to hammer home U.S. and Israeli isolation on the issue.

However, the Palestinians are undecided whether to push for a vote ahead of the U.S. election in November – timing which might anger President Barack Obama – or just after. “Whatever, it will happen well before the end of the year,” Erekat told Reuters. source – Yahoo News