Palestine won a first diplomatic victory in its quest for statehood on Wednesday when the UNESCO executive committee backed its bid to become a member of the cultural body... 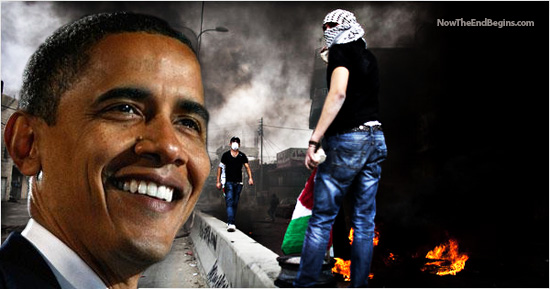 Obama has clearly sided with the Palestinians, all verbal protests to the contrary notwithstanding
by Geoffrey Grider October 5, 2011
NOW THE END BEGINS SHARE:

Palestine won a first diplomatic victory in its quest for statehood on Wednesday when the UNESCO executive committee backed its bid to become a member of the cultural body with the rights of a state.

Obama has clearly sided with the Palestinians, all verbal protests to the contrary notwithstanding

Palestine’s Arab allies braved intense US and French diplomatic pressure to bring the motion before the committee’s member states, which passed it by 40 votes in favour to four against, with 14 abstentions.

The Palestinian bid will now be submitted to the UNESCO general assembly at the end of the month for final approval.

The United States urged all delegates to vote “no” at the general assembly, with its ambassador to the Paris-based body, David Killion, saying that “granting the Palestinians full membership now in a specialised agency such as UNESCO is premature”.

US Republican lawmaker Kay Granger, who chairs the key subcommittee that disburses US monies for diplomatic purposes said in a statement that she “will advocate for all funding to be cut off”, if UNESCO accepted the Palestinians in as a state. Killion said it was “inappropriate” for UNESCO to consider Palestine as a recognised member, while the United Nations Security Council was reviewing a Palestinian request for statehood recognition. This request, which Palestinian president Mahmud Abbas presented to UN Secretary General Ban Ki-moon on September 23, will likely be voted on in the coming weeks. source – Yahoo News