Critical components of this strategy are about real Islam and how important the Islamic Friday sermons are and where they need to go. ... 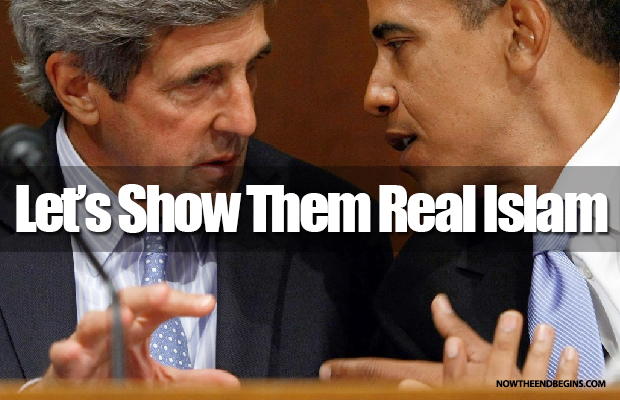 “I consider it part of my responsibility as president of the United States to fight against negative stereotypes of Islam wherever they appear… America is not — and never will be — at war with Islam… Islam is not part of the problem in combating violent extremism — it is an important part of promoting peace.”  – Barack Hussein Obama, Cairo Speech 2009

The Obama administration is embarking on an outrageous but predictable strategy to battle the threat of ISIS in the Middle East. John Kerry, in a round-table discussion to world leaders, said that we must show the world ‘real Islam’.

Secretary of State John Kerry said Monday that to counter the ideology of the Islamic State in Iraq and the Levant (ISIL) and its claim of a “religious foundation” for its actions, part of the strategy of the international coalition he is attempting to assemble must be to “begin to put real Islam out there.” Kerry, in Paris for talks with various world leaders to build that coalition, further said that all of the Arab leaders he had spoken with earlier concurred about their focus on “real Islam and how important the Friday sermons are.” The secretary of state recently said that ISIL’s ideology “has nothing to do with Islam” and President Obama echoed these words, saying that “ISIL is not ‘Islamic.'”

Kerry’s remarks about “real Islam” came during a “roundtable discussion” with the press after the secretary met with representatives from twenty-six countries to discuss how to confront the threat posed by ISIL. In recent days Kerry has alternated between calling the action against ISIL “war” and “counter-terrorism,” but in any case he downplayed the military aspect of the operation. The military piece, he said, is a “critical component”, but “probably far more important” will be the effort to “start drying up this pool of jihadis who get seduced into believing there’s some virtue in crossing into Syria to fight or to join ISIL.”

“It has to start major efforts to delegitimize ISIS’s claim to some religious foundation for what it’s doing and begin to put real Islam out there and draw lines throughout the region. And I think this is a wake-up call with respect to that because every Arab leader there today was talking about this, about real Islam and how important the Friday sermons are and where they need to go. Those are critical components of this strategy.”

Now you are beginning to the see the real war that Obama intends on waging. It’s not against ISIL, it’s a war for the promotion of Islam and Sharia Law in America.