Obama announced on the eve of his trip that his administration is changing the name of North America's tallest peak, Mount McKinley, to Denali, its traditional Athabascan name.... 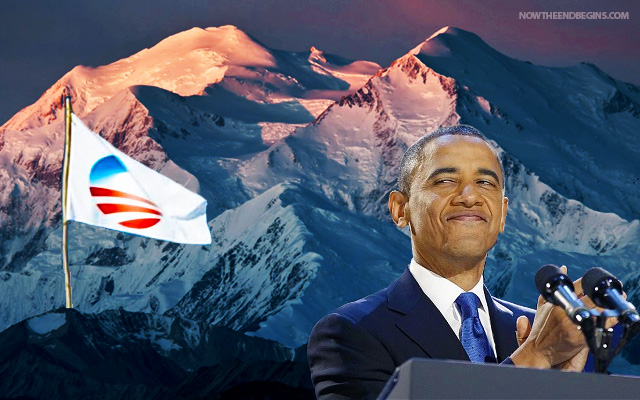 “And a mighty king shall stand up, that shall rule with great dominion, and do according to his will.” Daniel 11:3 (KJV)

EDITOR’S NOTE: Anti-American president and White House occupier Barack Hussein Obama loves to tear down and remove symbols that stand for the greatness of our nation. He seeks to reduce us to the level of any other nation, and has been astonishingly successful at it. His latest stunt is now to remove the name of revered American president William McKinley from the Alaskan mountain that has borne his name since 1917, and replace it with the name Denali, which means “high one”.  Which is exactly how he sees himself.

WASHINGTON (AP) — Arctic temperatures and a mix of messy energy politics await President Barack Obama on his historic trip to Alaska. Even before he departed, Obama was making waves with a decision to rename Alaska’s famed Mount McKinley despite a backlash from Ohio politicians.

Obama flies to Anchorage on Monday morning for a three-day tour of the nation’s largest state, closely choreographed to call attention to the ways Obama says climate change is already damaging Alaska’s stunning scenery. By showcasing thawing permafrost, melting sea ice and eroding shorelines, Obama hopes to raise the sense of urgency to deal quickly to slow climate change in the U.S. and overseas.

His excursion north of the Arctic Circle will make Obama the first sitting president to step foot in the Alaska Arctic, home to Alaska Natives who have received less attention amid Obama’s recent efforts to improve conditions for Native Americans. In a major show of solidarity, Obama announced on the eve of his trip that his administration is changing the name of North America’s tallest peak, Mount McKinley, to Denali, its traditional Athabascan name.

Obama’s move to strip the mountain of its name honoring former President William McKinley, a son of Ohio, drew loud condemnations from Ohio lawmakers, including House Speaker John Boehner, who said he was “deeply disappointed” in the decision.

“This political stunt is insulting to all Ohioans, and I will be working with the House Committee on Natural Resources to determine what can be done to prevent this action,” added Rep. Bob Gibbs, R-Ohio.

In renaming 20,320-foot Mount McKinley as Denali, Obama was instating a moniker Alaskans have informally used for centuries. The name means “the high one” in Athabascan. source