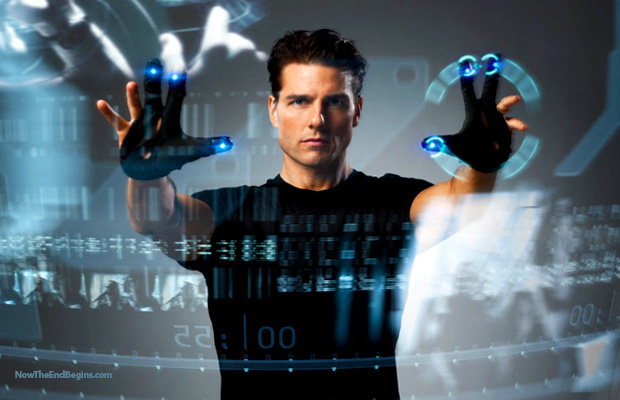 With the introduction of a true holographic display, everything in the hit film "Minority Report' will have come to pass.
by Geoffrey Grider June 6, 2014
NOW THE END BEGINS SHARE:

“Imagine if everything coming back to you was in 3-D—all of your shopping, all of your gaming, every way you retrieve data,”

The new market in smart devices is not centered around features, it is about the display. Over the past few years, nearly all makers of smart devices – phones, tablets, pads, wearables – can now all offer basically the same types of apps which do the same types of things. But a virtually (pun intended) untapped market is how that information is displayed. Until now.

With the introduction of a true holographic display, everything in the hit film “Minority Report’ will have happened. Mind. Blown.

The Wall Street Journal this week reports that startup Ostendo Technologies in Carslbad, California, has been working on a hologram projector chipset that is no larger than a Tic Tac. The amazing thing about this display is that it requires no bulky special glasses or headsets. The virtual reality that it projects is clearly seen with the naked eye, and it is coming to your smart device sooner rather than later. 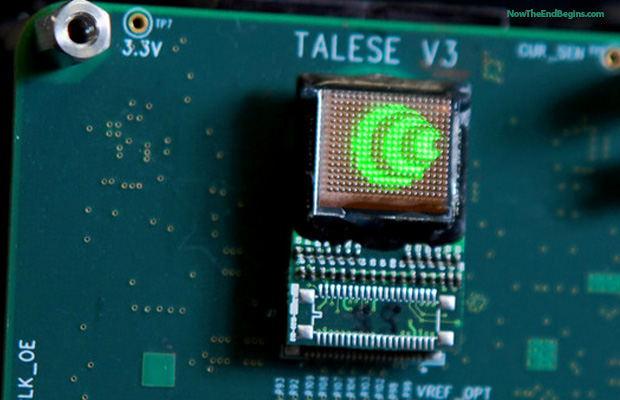 Ostendo’s CEO says that ‘display is the last frontier.’ Pictured, a company chip that can produce a hologram.

Interestingly, much of the money coming from investors has come from the US government’s super-secret DARPA group – Defense Advanced Research Projects Agency – so that gives you an indication that it will be used in the spy world. The Wall Street Journal reported this projection:

According to Ramesh Raskar, an associate professor at the Massachusetts Institute of Technology, who is working on 3-D displays for MIT’s Media Lab, Ostendo’s advantage and the key to its 3-D capability is its resolution. The Retina display on Apple Inc.’s iPhone, for example, has about 300 dots per inch, Ostendo’s chips are at about 5,000 dots per inch.

Ostendo, which says it has several opportunities with major handset manufacturers, expects the first 2-D projector unit to be in the hands of consumers before the summer of 2015. With a lens attached, it will be less than 0.5 cubic centimeters, roughly the size of the camera in the iPhone. It also expects to begin manufacturing the second version of the chip, with 3-D capability, in the second half of 2015.