Horrifying images of bodies and limbs floating in the Orontes River in Hama were aired by Syrian state television early Thursday, Aug. 4. Contrary to official claims that they... 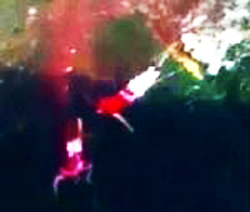 Horrifying images of bodies and limbs floating in the Orontes River in Hama were aired by Syrian state television early Thursday, Aug. 4. Contrary to official claims that they belonged to Syrian soldiers torn to pieces by protesters, debkafile reports they are the victims of Syrian tank fire and ZU-23 automatic anti-aircraft artillery trained on residential buildings and streets in the last 48 hours as the dead pile up in the streets.

There will be blood.

Citizens cowering in their homes are throwing the dead out of windows and off roofs into the river.
They are reliving the terrors of the massacre President Bashar Assad’s father inflicted on this city of half-a-million in 1982 which left 30,000 dead.

Our sources report that the Syrian ruler decided to take advantage of three events for unleashing an all-out assault against rebellious Hama:
1. World attention was riveted on the deposed Egyptian President Hosni Mubarak’s trial which opened in Cairo Wednesday. As Mubarak was stunningly wheeled into the courtroom on a stretcher and deposited in an iron cage, Syrian tanks thundered into central Hama, indiscriminately shelling buildings and torching them. Their anti-aircraft guns mowed down the rebels who were firing anti-tank weapons from roadblocks.

Buildings suspected of housing snipers at windows or on rooftops were flattened.
Casualty figures cannot be confirmed because the Syrian authorities have cut off all the city’s ground and cell telephone and Internet links. Electrical current and water are also switched off. The dead are believed to be in the hundreds and rising all the time because the thousands of injured cannot be reached for medical care.
The satellite phones in the hands of some of the dissident leaders provide the only source of information on the situation in the embattled city.

2. The crisis between the Prime Minister Tayyip Erdogan and the army after the entire top command resigned in a body, which Assad expected would preoccupy all the decision-making levels in Ankara to the exclusion of Syria. He counted on no one in authority venturing to order the Turkish units poised on the Syrian border for weeks to cross into northern Syria and establish a buffer zone there to ease the siege on Hama and other towns.

3. The UN Security Council convening Wednesday night routinely condemned the killing of civilians in Syria and human rights abuses but stopped at approving sanctions or any concrete penalties for the delinquent Assad regime.
Although US UN representative Susan Rice called the statement “an important and strong step,” Bashar Assad was not impressed and the Syrian army’s onslaught on Hama kept going through the night.

Assad was further encouraged by an event in the US Congress. After the Senate Tuesday, Aug. 3 approved the bill raising the national debt ceiling, the lawmakers were scheduled to turn to the crisis in Syria. However, US Ambassador Robert Ford, on hand to brief the senators, saw them hurrying to leave Capitol Hill. Only one senator remained for the briefing.

The Syrian ruler has therefore concluded he can safely ignore international opinion. In the face of US and Western indifference, he can continue to mercilessly slaughter his people without fear of the sort of intervention they undertook in Libya or UN sanctions. source – DEBKA