Building the temple would “usher in a new era of universal harmony and peace,” as prophesied in the Bible. “It is not enough to wait and pray for the... 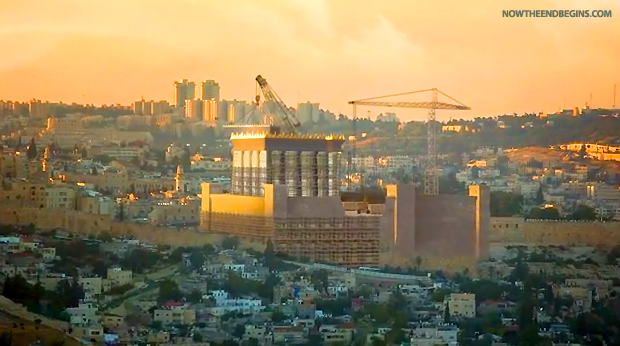 Organization launches campaign to raise funds for draft plans of site, which, if built, it says, would ‘usher in universal harmony’

There is much excitement in Israel with talk of the proposed coming Third Temple in Jerusalem. As you will see in this article, Jews in Israel feel that the building of this temple will usher in “world peace and harmony”. But that is not what the prophets have declared. Daniel says that, in the last days, the temple that will be built will be the temple of Antichrist, and will offer up abominations that the God of Abraham will completely reject. Instead of bringing in ‘world peace’, the Old Testament declares that it will usher in the time of Jacob’s Trouble, and great tribulation will fill the whole earth.

As Egypt, Qatar, the US and the UN write proposals for Israel-Hamas ceasefires, one organization based in Jerusalem’s Old City hopes to compose a peace plan of a different kind: a detailed architectural blueprint for the Third Jewish Temple on Jerusalem’s Temple Mount.

The Temple Institute, which has recreated 60 vessels to be used in a Third Temple and which sponsors educational programs about the temple worldwide, has created a $100,000 Indiegogo campaign to draft plans for a Third Temple.

Building the temple, says the Indiegogo campaign statement, would “usher in a new era of universal harmony and peace,” as prophesied in the Bible. “It is not enough to wait and pray for the Third Temple,” the statement added. “It is a Biblical obligation to build it.”

According to Rabbi Chaim Richman, the institute’s international director, the temple would stand in the present location of the Dome of the Rock, a Muslim shrine. Muslims revere the mount as the Haram al-Sharif, or Noble Sanctuary.

But Richman did not set a target date for breaking ground for the construction project. The temple will be built, he told JTA, when “the world will want us to build the temple.

“The Jewish people have a responsibility to all of humanity, including Islam,” Richman said. “I don’t expect it to come about through any sort of confrontation or any sort of military maneuver. The Jews have to represent good in the world, light in the world.”

The Indiegogo campaign is tied to the upcoming fast of Tisha b’Av, which mourns the First and Second Temples’ destruction. Richman quoted the verse in Isaiah calling the temple “a house of prayer for all nations.”